Video of young woman ‘under influence of drugs’ in Amritsar's Maqboolpura goes viral : The Tribune India 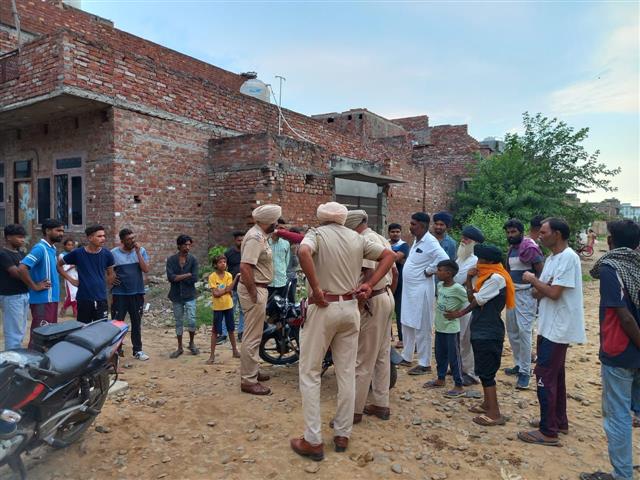 The police carry out a search operation in the Maqboolpura area of Amritsar on Sunday. Tribune photo

A video of young woman, who was allegedly under the influence of drugs, went viral on social media on Sunday.

The video was reportedly captured in Maqboolpura locality falling under the Amritsar East constituency. The locality is infamous for having drug addicts. Maqboolpura is one of the localities in the holy city, which is infested with drugs, while many ‘drives’ launched by the police have failed to yield the desired results.

Action will be taken

We have started a probe into the video, which is apparently an old one. We are trying to identify the man who had captured the video and appropriate action will be taken. Mukhwinder Singh Bhullar, DCP (Investigations)

The video has led to widespread criticism of the act with farmer leader Sarvan Singh Pandher of the Kisan Mazdoor Sangharsh Committee announcing that the issue would prominently be raised during their protests. The young girl in the video was unable to stand on her feet. A resident of the area who was captured on the video alleged in the video that she had injected herself with drugs. The area falls under the Amritsar East constituency represented by AAP MLA Jeevan Jyot Kaur.

Pandher said the act was very disturbing. He said he saw the video on social media. “The video revealed that even daughters were not safe in Punjab,” he rued. The AAP government came to power by promising to eradicate the menace from the state, but nothing happened till now. He said tomorrow the KMSC would be holding a protest outside the residences of AAP ministers throughout the state.

The drug abuse remained an important poll plank during the past two Assembly poll. In the 2017 Assembly poll, the Congress led by Capt Amarinder Singh had promised in its manifesto to end the menace. After becoming the CM, he vowed to curb the problem. Similarly, the current dispensation (AAP) also promised to stem the problem soon, but it continues unabated with many youngsters, including girls, getting caught in the trap of drugs.

Deputy Commissioner of Police (Investigations) Mukhwinder Singh Bhullar said they had started a probe into the video, which is apparently an old one. “We are trying to identify the man who had captured the video and appropriate action would be taken,” he said. In the video, it was not clear whether she had injected herself with drugs as being alleged. There could be some health issue, but everything would be clear after investigation.

3 rounded up in search operation

After the video went viral, the Maqboolpura police carried out a search operation in the locality on Sunday. During the search operation, the police rounded up three persons and recovered narcotic substances from their possession. The police have registered separate FIRs in this connection. Besides, 12 persons were detained for investigations due to suspicious activities. The police also seized five vehicles suspected to be stolen ones from the area. Bhullar said the police also recovered Rs 21,960 of drug money from the area.