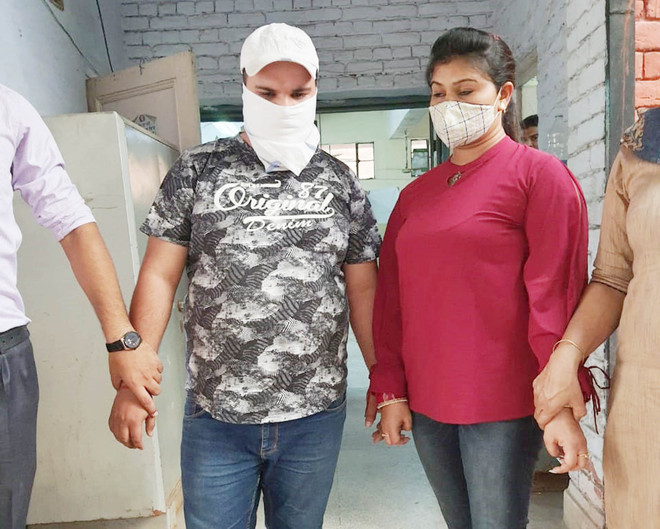 MC building inspector Harpreet Kaur and her husband, who were arrested by the Vigilance Bureau, in Amritsar on Tuesday. Tribune photo

The Vigilance Bureau has nabbed a building inspector of the Amritsar Municipal Corporation and her husband for allegedly demanding a bribe of Rs 1 lakh from a trader. The accused have been identified as Harpreet Kaur (building inspector) and Prathamesh Mohan, alias Rahul, of New Mohindra colony.

The duo was booked under the Corruption Act following a complaint by Manoj Chhabra, a resident of Shivala colony, while further investigation was under way.

Chhabra told the police that he owns a plot of around 33.66 sq yd and was constructing three shops on the ground floor and a residential accommodation on the first floor. He said on October 24, the MC employees stopped the construction activity and took away the equipment on the instructions of Harpreet. He said he approached Mohan, who was known to him.

Chhabra said Mohan demanded Rs 1.20 lakh for the alleged illegal construction of the said shops. He said Mohan sought Rs 1 lakh for them while Rs 20,000 for the complainant who had filed a complaint with the MC authorities. After negotiation, the deal was settled for Rs 1 lakh, which Chhabra had to pay in two installments. Mohan also agreed to return the equipment seized from the construction site.

Instead of paying the bribe, Chhabra filed a complaint with the Vigilance Bureau, which got the audio recordings of Mohan, who was demanding the bribe on behalf of Harpreet.

A case under Sections 7 and 7-A of the Prevention of Corruption Act added with Section 120-B of the IPC was registered against Harpreet and Mohan.

Senior Superintendent of Police (Vigilance) Parampal Singh confirmed the arrest of Harpreet and her husband Mohan while adding that further investigations were under progress.