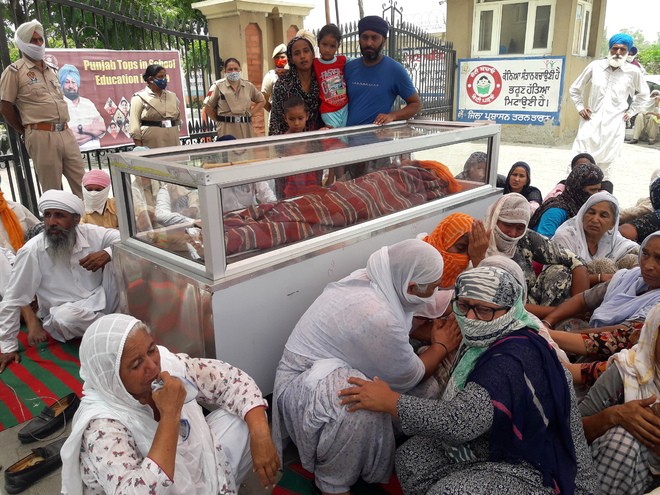 Residents hold a protest by keeping the body outside the DAC in Tarn Taran on Friday. Gurbaxpuri

Residents of Shingarpur village under the Sarhali police station on Friday held a protest by keeping the body of Kuldeep Singh (30) of the same village in front of the local District Administrative Complex (DAC) here.

Fourteen persons of the village had been booked under Section 307 of the IPC (attempt to murder) and other sections of the Arms Act by Sarhali police on May 27. The police had added Section 302, IPC, to the FIR on Thursday. The relatives of the victim, residents of Shingarpur village and other villages, and workers of different farmer, political, social and other establishments participated in the protest.

Addressing on the occasion, Pargat Singh, sarpanch of the village, Sarwan Singh, former sarpanch, and other representatives said from the day of the incident till June 10, the police conducted not even a single raid to arrest the accused.

The residents started their protest at 11 am, which was on till the filing of the report in the evening. The police failed to convince the residents to lift the protest in which a large number of women were present in the scorching heat.