For the first time, a vehicle was deployed to collect samples 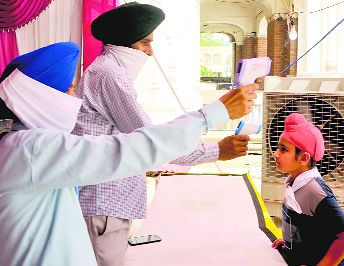 Of the new cases, 10 are ILI (influenza-like illness) cases and two are contacts of positive patients. The localities such as Majitha Road and Tarn Taran Road reported two ILI cases each while Fatehgarh, Ajnala, Attari, Hargobind Avenue, Bhagtanwala and Jandiala reported one ILI case each. Besides, one contact of a positive patient from Varindavan Enclave and one from Hargobind Avenue tested positive. Of the 164 active cases in the district, 114 are admitted in hospitals and 50 mild cases are home-quarantined.

Meanwhile, for the first time, the Health Department deployed a vehicle to collect samples from Azad Nagar in the Chheharta area. Civil Surgeon Dr Navdeep Singh said 54 samples were collected from Azad Nagar. He added that the vehicle would be sent to containment zones and micro-containment zones to collect samples en masse so that people did not have to travel to hospitals.

Members of the inspection committee constituted at Government Medical College after the allegations of purchase of alleged substandard PPE kits by Government Medical College, appeared before the investigator appointed by the state government on Tuesday. However, as the complete records of the purchase were not presented by the college, the Chief Administration, Amritsar Development Authority, has instructed the officials to present the same on Wednesday.