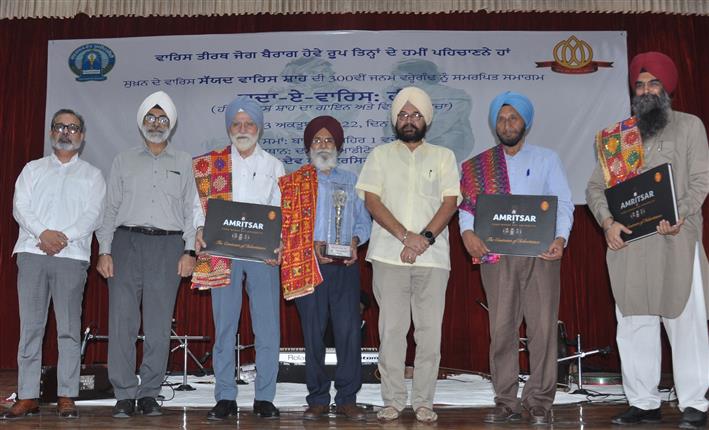 Even after almost 250 years since it was written, Waris Shah’s Heer, remains one of the most significant and popular works of Punjabi literature. Celebrations of the poetic rendition of the qissa of Heer-Ranjha by Sayyed Waris Shah have been a source of inspiration for generations of artists on both sides of Punjab. Celebrating and commemorating the 300th birth anniversary year of Waris Shah, Guru Nanak Dev University (GNDU) today invited literary experts, who shared their insights into Waris Shah’s Heer and its legacy on socio-cultural map of Punjab.

In a special event held in collaboration with the Punjab Arts Council, to mark the 300th birth anniversary of Waris Shah that was celebrated in January earlier this year, Sadaa-e-Waris, had Padma Shree awardee Surjit Patar, noted historian and Sikh scholar Sumail Singh Sandhu, Dr Lakhwinder Singh Johal and Shiromani Natakar playwright Jatinder Brar, speaking on the significance of Heer.

“Waris Shah’s Heer has remained one of the most telling works of literature. It signifies the true Punjab and punjabiyat. Its language might be from this land, but the fact that there have been several adaptations, renditions and inspired works of Heer by artists across the globe, is a proof that it’s reach is global,” said Patar. He also added that Punjab has always been known as the land of music and we must protect that aspect of heritage for future.

“Punjab has a rich tradition in music and it has also touched every aspect of life of Punjabis, be it in Punjab or elsewhere. In current times, when the world in general is experiencing several social and political upheavals, one must always find solace and humanity through music,” he said.

The Padma Shree Punjabi poet also received the first ever Waris Shah Samman by the GNDU. Jatinder Brar, while speaking about the shared heritage of Heer and Waris Shah, said Heer still connects charda (East, often referred to the Punjab in India) Punjab with lehnda (West, often referred to the Punjab in Pakistan) Punjab. “Heer Waris Shah is a shared legacy of both the Punjab’s as Waris Shah was born in Pakistan and we must make attempts to preserve and promote it among the young generation. The fact that the 300th birth anniversary of Waris Shah went quietly gives all more reason to hold on to the cultural and folk legacy of Punjab,” he said.