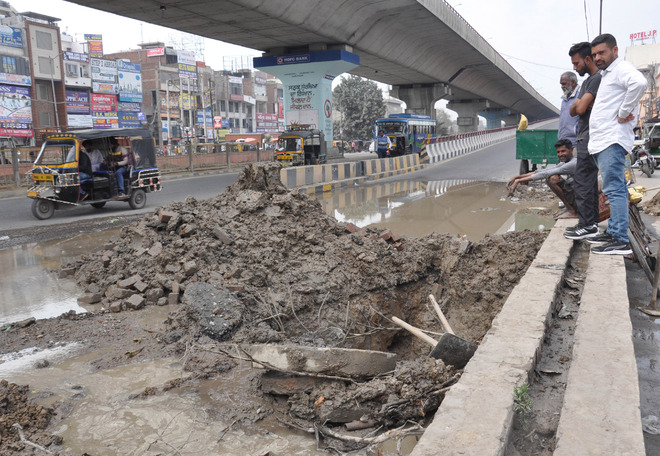 Accumulated dirty water near the elevated road is not just a cause of accidents, but also poses health risk as it acts as a perfect place for dengue-breeding mosquitoes. Tribune photo

A pool of overflowing sewage is risking the chances of accidents for the commuters at the mouth of elevated road, near Pingalwara.

The shopkeepers around the spot are daily witnessing mishaps due to it. Moreover, the accumulated dirty water further poses health risks as chances of dengue breeding mosquitoes increases.

Arshpreet Singh, a transporter with his shop situated close by, stated that this unhygienic situation has been prevailing for over a week. “All these days, the complication has been growing. It had started with sewage overflowing. Initially, the murky water had occupied 100 sq ft area and now it has spread to almost 900 sq ft land.”

Sushma Rani, who operates a tandoor shop at Ramtalai Chowk, said, “Vehicles have brought the water in front of their shops and the road remains soaked throughout the day.” She added that many a time vehicles also skid. There are around 10 tandoor shops, earning the cross a nickname ‘tandoor wala chowk’.

All these days, the complication has been growing. It had started with sewage overflowing. Initially, the murky water had occupied 100 sq ft area and now it has spread to almost 900 sq ft land. —Arshpreet Singh, A transporter

Narinder Singh, a resident of Tehsilpura, a colony situated on the left flank of the elevated road, stated that he daily commutes over the elevated road to reach his office in Ranjit Avenue. “Hence, I know the width and depth of the put covered underneath the dirty water but those unfamiliar with it are bound to damage their vehicles after hitting the spot,” he added. To no surprise, a large number of vehicles break down here and several riders fall off injuring themselves after losing control of their ride.

Meanwhile, labourers working at the spot shared that they have been working to find the leak in the sewerage pipe for the last two days. But all efforts have gone down the drain as the volume of collected water makes it really hard to find the spot.

Mayor Karamjit Singh Rintu said the matter was already in the notice and mending was in progress.