Farm bills: Sunny Deol will not be allowed to enter Gurdaspur, say Congmen 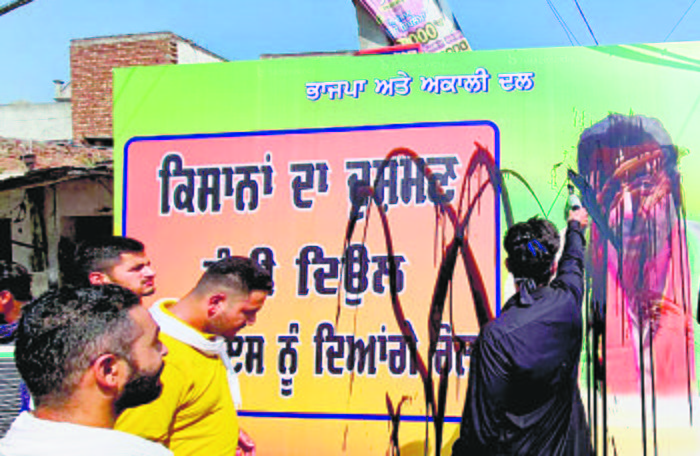 In Qadian, over 200 Congress held a protest and blackened the posters of the Gurdaspur MP.

Protests erupted in Qadian, Batala, Dera Baba Nanak and Pathankot over BJP MP Sunny Deol’s tweet in favour of the farm Bills. Members of various kisan unions and Congress activists claimed they would not allow Deol to enter his constituency for his “anti-farmer stance”.

Kanwar said despite claiming to be a farmer’s son, Deol had gone against the interests of farming community. “We will not allow Deol to enter his constituency. If he does try to come, he should be ready to face consequences. He knows nothing about the ground reality.”

He said, “Instead of standing with people who voted for him, he stood with his party, which is doing things which are totally detrimental to the interests of farmers. Today, we blackened his posters and if he comes, we will blacken his face. In just one stroke, the Centre made farmers apprehensive whether they will get minimum support price (MSP) for paddy and wheat produce.”

MLA Fateh Jung Bajwa said Deol has turned out to be a “disaster”. “Instead of going public on social media, Deol should have kept quiet. Now, people are repenting what sort of representative they have elected. I fail to understand why he has entered politics when he knows nothing about it,” said the MLA.

“Deol has proved to be a misfit in the world of politics. He is turning a blind eye towards the interests of farmers. Under no circumstances he will be allowed to enter the constituency. He calls himself a farmer’s son, but ironically he could not look after farmers. He should resign,” said Bains.

Cabinet minister Sukhjinder Singh Randhawa, too, vented his ire on the MP. “We are fighting with the Centre, but for some inexplicable reason, MP Deol is battling farming community. He delivers good dialogues, but politics is not about acting. I ask Deol to keep in mind the anger of farmers next time he decides to come to Gurdaspur,” he said.

“He is a man who carries misplaced confidence. If he is so sure and confident of himself, why does he not take up issues relating to the welfare of people of Gurdaspur in Parliament? Actually, we all are waiting for him to make his debut speech in the Lok Sabha,” added Randhawa.

Amarinder has thrown farmers back at Modi’s mercy: SAD