Weaved in opulence and heritage, Chanderi shines bright at PITEX 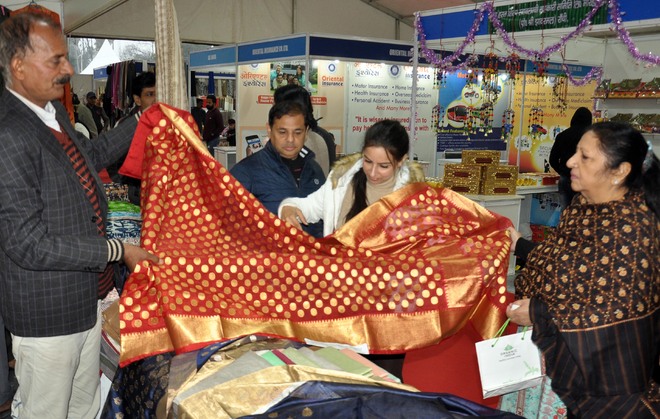 People have a look at a Chanderi ashrafi booti-style saree at PITEX in Amritsar on Friday. Sunil Kumar

Considered a part of country’s loom heritage, Chanderi sarees have always been a symbol of grace and royalty. Whether it was Maharani Gayatri Devi or the contemporary royalty, including Kareena Kapoor Khan, Chanderi sarees have always found their place in their celebrated closets and a long list of royal patronage. For Amritsaris, the silk loom finds fascination in the form of beautiful six yards of pure excellence weaved by the artisans of Madhya Pradesh, proudly displayed at the PITEX expo.

Bringing the shear sophisticated beauty of Chanderi and its heritage, Mrignyani, an initiative by the Department of Handloom and Handicrafts Development, Madhya Pradesh, has brought two masterpieces by the Chanderi weavers. The two sarees that caught the attention of every visitor at the PITEX are weaved with 24 carat gold in the heritage ‘ashrafi booti’ style.

“The sarees are weaved with a zari thread, made from 24-carat gold by two artisans in four-month time. The sarees are made in ‘ashrafi booti’ or gold coin style that is prevalent since the time of the Mughals. The designs and patterns used for weaving these sarees date back to 1930, when the royal families of Madhya Pradesh and Rajasthan used to get these made by special artisans. These are very much a part of our handloom heritage as each saree is delicately handcrafted to maintain its exclusivity,” said ML Sharma, regional manager of the Mrignayani initiative.

Mrignyani has brought two sarees weaved in gold worth Rs5 lakh. “The most expensive piece in our collection is the one weaved in red, which is worth Rs3.69 lakh and another priced around Rs1.30 lakh. The price of gold weaved sarees in Chanderi could easily be placed between Rs50,000 to Rs5 lakh, depending on the quality and quantity of gold used,” said Sharma.

Patronised by the royals, Sharma says that the Chanderi sarees had a huge demand overseas. “The Chanderi weave has been recognised by the state government under its pilot project and a technical park has been created at a cost of Rs98 crore to encourage the craft. The government is training Indian weavers, providing them infrastructure required to produce Chanderi handloom and keep the revival process consistent. In Amritsar, we have received a tremendous response,” said Sharma.