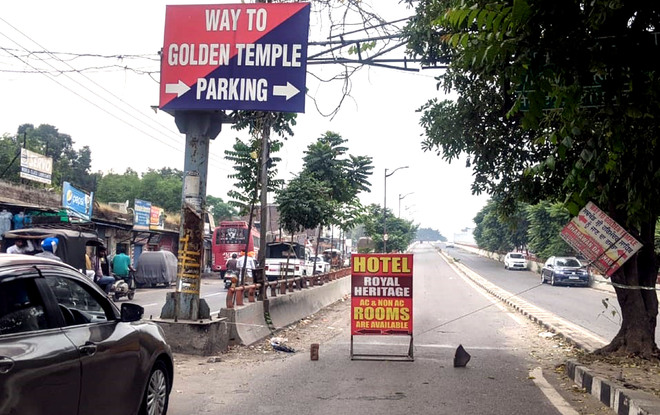 Entry of Saragarhi parking blocked as the parking lot was full, in Amritsar, on Sunday. photo: Vishal Kumar

With three consecutive holidays, a huge rush of devotees at Darbar Sahib led to traffic jams in the interior parts of the city here on Sunday.

Visitors faced inconvenience while searching for parking space as all parking lots were full. The entry of vehicles on the overbridge leading to the Saragarhi parking, which is the main parking lot for visitors of Darbar Sahib, was blocked. This further led to jams on Gheo Mandi Chowk and Sheran Wala Gate Chowk.

The devotees were seen scurryng for parking spaces on the Outer and Inner Ring Roads of the walled city.

Davinder Singh, a devotee from Rauke village of Moga, said: “We reached the holy city around 9 pm on Saturday. We waited for two hours for the parking at Saragarhi. Then, we left the city early morning to pay obeisance to some other gurdwaras on the periphery of the city. Later, when we returned, the Saragarhi parking was full. It took two hours to find a space for parking. We have parked our car on the roadside and are afraid of theft.”

Hardeep Singh, another devotee from Sangrur, said: “There should be a good arrangement of parking and public transport for Darbar Sahib. We have parked our car near the bus stand and walked towards the shrine. The roads were jam-packed and not fit for pedestrians. Not only this, there is no proper public transport to reach the Golden Temple by parking vehicles away from the walled city.