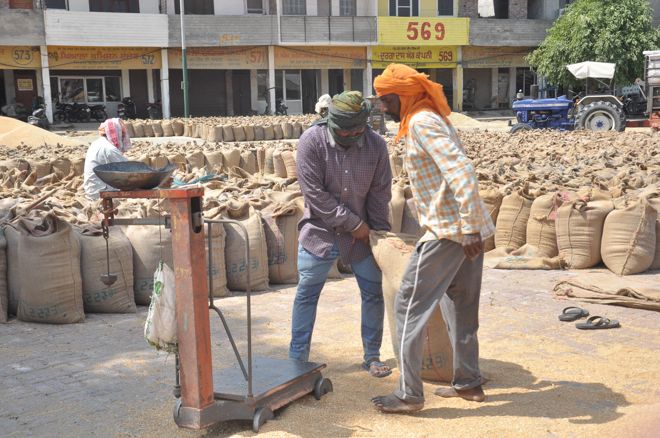 With the arrival of 52,567 metric tonne (MT) wheat on Monday, the rush at grain markets started to increase and farmers have already started complaining that they are being harassed by the employees of procurement agencies on one pretext or the other.

Farmers said the most common objection by the procurement agencies is regarding grains having more moisture than the permissible limit after which the produce is procured by applying an unauthorised cut in the minimum support price.

The farmer leader said farmers were also harassed on the pretext of shrivelling of grains. Ajnala said even though the government had fixed the expenses and fee of Rs. 6.12 for one 50-kg wheat bag and Rs. 3.68 for one 30-kg bag, they were being charged 2 per cent to 2.5 per cent of the purchase price.

Meanwhile, different procurement agencies have purchased total 1.63 lakh MT wheat so far. Private players, too, have purchased 737 MT crop. The district mandi officials said 1.80 lakh MT of wheat has arrived in the markets so far and nearly 93 per cent of it has been purchased.

Amritsar: A delegation of the Sanyukt Kisan Morcha on Monday submitted a memorandum to the Deputy Commissioner’s office demanding legal guarantee for the minimum support price (MSP). Farmers’ leaders Dr Satnam Singh Ajnala, Jatinder Singh Chinna and Balwinder Singh Dudala stated that the MSP for the crops should be fixed with at least a 50 per cent profit over the input costs. They said the MSP should also be fixed for all agricultural produce, including vegetables, fruits, poultry and milk. The SKM also demanded Rs. 1,000 per quintal bonus reasoning that the price of wheat in the international market had increased and farmers were suffering losses as yield had decreased this season. TNS