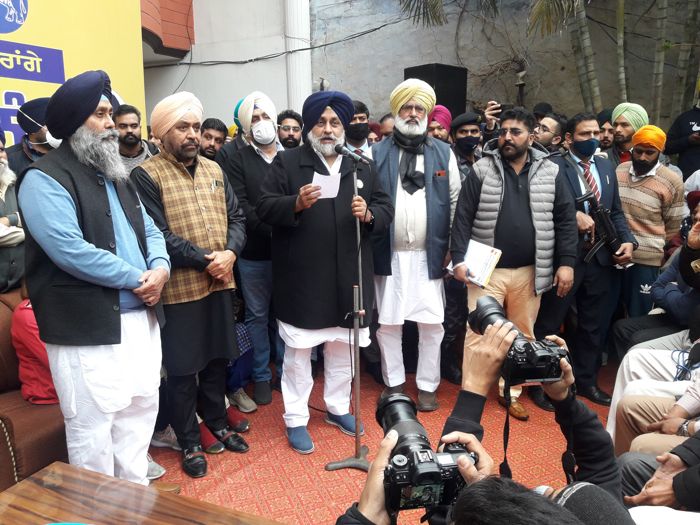 SAD president Sukhbir Singh Badal claimed that SAD will win 80 seats in the 117-member Vidhan Sabha in the forthcoming election and form a stable government in the state.

He was here to address a gathering convened by prominent Congress leaders, who declared to join SAD.

Speaking on the occasion, the SAD president made a scathing attack on the Congress government in the state and on AAP for their style of functioning. He said corruption had crossed all limits in the state at present as had been proved in the recent raids conducted by the ED on the places of the near and dear ones of Chief Minister Charanjit Singh Channi. He said PPCC president Navjot Singh Sidhu was blackmailing the party high command by threatening to quit and creating troubles in his style of working.

Badal said AAP supremo Arvind Kejriwal had humiliated Bhagwant Mann many a times in one or the other way. He called AAP supremo an outsider, who had no affection with Punjab. Prominent Congress leaders who joined SAD were Gurminder Singh Rataul (PPCC secretary), Vijay Pal Chaudhry, Jagdish Kumar Muradpur and Anita Kumari Verma among others. They were appointed as state-level party office-bearers by Sukhbir Singh Badal.

Members of three gram panchayats of the area, who had allegiance to the Congress, too, joined SAD on the occasion.

18 hours ago
8
Jalandhar in brief