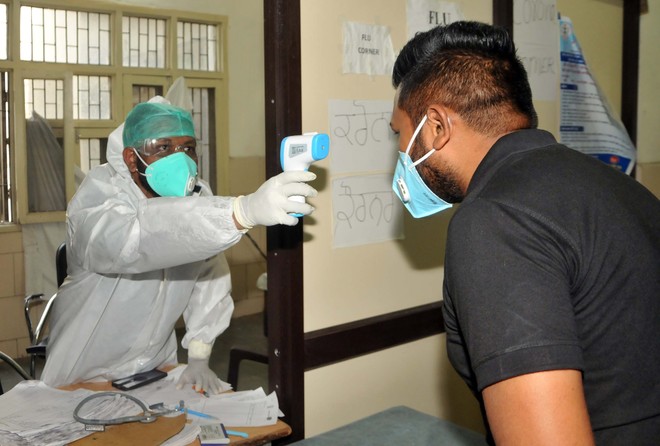 With eight new Covid-19 cases being reported on Monday, the total count of positive cases in the district has increased to 335. The new patients include one person each from the Batala Road and Palm Garden areas who tested positive on Sunday night.

Civil Surgeon Dr Jugal Kishore said reports of 91 samples were awaited from the laboratory at Government Medical College. He said at present, the district had 28 active cases, 301 recoveries and six deaths due to the disease so far.

After reports of a number of cases from Rani Ka Bagh area, Congress MLA Raj Kumar Verka said a door-to-door survey of the area was being conducted which would be completed by tomorrow evening. He said people in the area should stay home and cooperate with the visiting medical teams.

Tarn Taran: One more Covid-19 positive case was reported in Tarn Taran district on Monday. Working in merchant navy, the patient is a resident of Kacha Pakka village. Civil Hospital Senior Medical Officer Dr Inder Mohan Gupta said the 32-year-old patient, along with his three colleagues, had returned to his home recently.

He said all four were screened at the Harike check-point and their samples were collected. While three of the reports came out negative, one came positive. The patient has been admitted to Covid care centre at the Civil Hospital. At present, the district has two active cases.

Earlier, a few days ago, a total of 161 Covid-19 patients were discharged from hospital in the district.

Tarn Taran: Eight more foreign returnees were kept under isolation at Sri Guru Angad Dev College, Khadoor Sahib hostel, 25 km from here, on Monday. They had returned from Australia, Canada and Malaysia and gone on tourist visas. They were stranded due to coronavirus threat and the lockdown imposed in the country. Lovejit Singh of Mianwind village said they were stranded at Malaysia Airport for days together, but the Indian embassy didn’t come to their rescue. Social organisations served food and gave them shelter at the airport, he said. There were total 23 persons, including these eight persons, who were kept under isolation at the Khadoor Sahib hostel. The Health Department collected their Covid-19 samples and sent these for testing. OC

No respite, 21 new cases in Solan