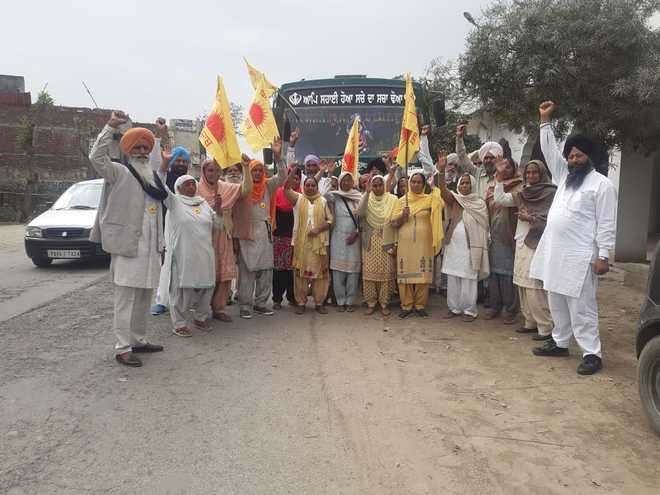 On the call given by the Kisan Sanyukt Morcha to reach Delhi on the International Women’s Day, jathas of women farmers from different villages left for Delhi on Sunday.

Nirvail Singh Daleke, general secretary of the Azad Kisan Sangharsh Committee, Punjab, said jathas had departed from Mallhia, Dalake and Kadgill vilages. Besides Nirvail Singh, Sawinder Kaur Kadgill, Baljit Kaur, Daljit Kaur and other women speakers, while addressing on the occasion, condemned the three farm laws. The leaders said that it was the first agitation in the history of the country after freedom when large numbers of women were taking part in the agitation. They urged the common man to take part in the agitation. The village elders extended best wishes for the women jathas.

The villagers raised slogans against the central government and demanded scrapping of the laws.

Amritsar: Addressing members of the Vegetable Growers’ Association, the All India Kisan Sabha, vice-chief, Lakhbir Singh Nizampur, on Sunday accused the Centre of being indifferent towards farmers’ woes at Dharar village.

He said the farmers’ agitation has completed more than 100 days in Delhi, but the central government has failed to find a solution. He said around 250 farmers have lost their lives during the ongoing agitation to date.

Nizampur said farmers would not accept anything less than revocation of the three agri laws. He said if the government does not withdraw the laws, the Samyukt Kisan Morcha would mobilise people in five states to oppose BJP’s candidates where voting would commence by March end. — TNS