Seek nothing less than their repeal 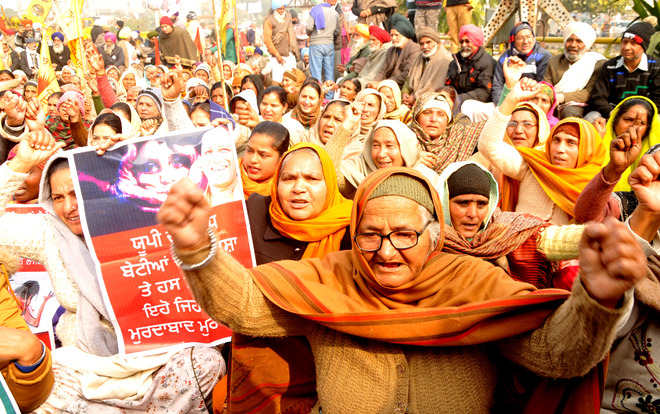 Women take part in a protest held in support of farmers on Mahila Kisan Diwas in Amritsar on Monday. photo: Vishal kumar

On a call given by the Joint Farmers’ Front to observe Mahila Kisan Diwas, a large number of women on Monday participated in a protest organised against the three controversial agricultural laws and demanded its immediate repeal.

The protest was held at Deen Dayal Upadhya Market located on Bhandari Bridge here. The women participants from different organisations took out a protest march that passed through various bazaars. They raised slogans against the Central Government for passing the three controversial laws that led the farmers to agitate on Delhi borders.

Speaking on the occasion, various women leaders pointed out that for the past 55 days, farmers belonging to different farmers’ organisations have been sitting on a dharna at Delhi border. They were joined by elderly people, women and children in the bone-chilling weather. They said around 100 farmers had lost their lives during the agitation.