NEW DELHI: Five Indian Air Force (IAF) personnel, including two officers, have been found guilty after a probe which concluded that the Mi-17 V5 helicopter that crashed in Budgam on February 27 was hit by an IAF ground-fired missile. 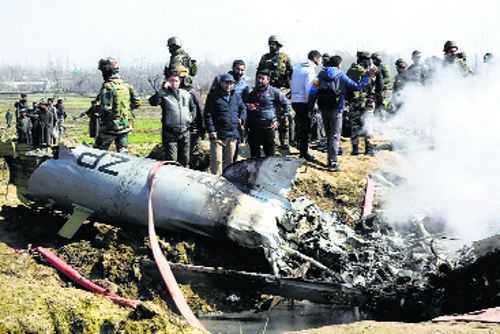 The helicopter had crashed at Budgam as it was approaching to land at Srinagar.

Five Indian Air Force (IAF) personnel, including two officers, have been found guilty after a probe which concluded that the Mi-17 V5 helicopter that crashed in Budgam on February 27 was hit by an IAF ground-fired missile.

The incident had occurred on the same day that India and Pakistan were locked in an air duel over Nowshera in Jammu and Kashmir.

The helicopter had crashed at Budgam as it was approaching to land at Srinagar.

All six IAF personnel on board and a civilian on ground were killed. The helicopter was downed by a surface-to-air missile (SAM) of IAF, fired from the Srinagar air base which assumed the helicopter to be a hostile platform.

Two officers, the Chief Operating Officer (COO) of the Srinagar Air Base and the Senior Air Traffic Control Officer have been found blameworthy by a Court of Inquiry (CoI). The IAF could possibly order the two officers to face a General Court Martial which in turn is empowered to decide on the quantum of punishment, including criminal charges, if any.

The other three IAF personnel would face disciplinary proceedings that could range from loss of seniority to censure.

The IAF Chief Air Chief Marshal BS Dhanoa, had earlier removed the Air Officer Commanding (AOC) of the Srinagar air base — in a move to show that procedural lapses will not go “unpunished”.

The Russian-made copter had crashed at 10.05 am — around the same time as Indian and Pakistani fighter jets were engaging each other over Nowshera in Jammu and Kashmir. Wing Commander Abhinandan Varthaman’s jet was downed around 10.30 am.

The CoI into the accident indicated lapses that lead up to the accident. The Air Traffic Control had called back the helicopter as an air duel between Indian and Pakistani jets had escalated. This is being seen as a lapse as the helicopter should have been sent away to a safer zone instead of being called back to Srinagar. Also, as the copter was returning, it should have been made to land at the designated safe spot.

On ground, the missile system and air defence guns fire away at aircraft or helicopters which can’t be identified.

That the IFF would remain mandatorily switched on was a decision taken last year after a near mid-air accident between a Sukhoi-30 fighter jet and a transport plane of the IAF. Though the IAF issued instructions that the IFF system should be switched on, the Srinagar air base had issued contradictory orders.

The IAF controllers on ground who were live monitoring the Pakistan air space had not reported any intruding helicopter.

Rajouri: Naik Rajib Thapa, 34, of Gorkha Battalion was killed in sniper fire by Pakistan troops at a forward post across the LoC in Kalsian in Nowshera sector of Rajouri on Friday. He was a resident of Mechpara village in West Bengal and is survived by his wife. OC