JALALABAD:Afghanistan’s Independence Day was marred by bloodshed when a series of explosions shook the eastern Afghan city of Jalalabad, wounding around 66 people, on Monday. 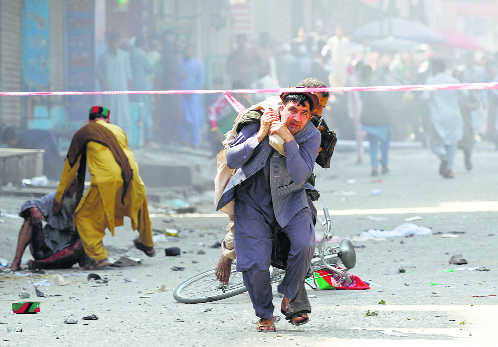 A man caries a wounded person after a blast in Jalalabad, Afghanistan, on Monday. REUTERS

Afghanistan’s Independence Day was marred by bloodshed when a series of explosions shook the eastern Afghan city of Jalalabad, wounding around 66 people, on Monday. As many as 10 blasts were reported in and around the city in the Nangarhar province, the authorities said. No group claimed responsibility. A day before, a blast at a wedding in Kabul left 63 dead and 200 wounded.

“The explosions were caused by IEDs in different parts of the city as groups of people were celebrating Independence Day,” Nangarhar Governor’s spokesman Attaullah Khogyani said, referring to improvised explosive devices.

Jalalabad is the scene of frequent bomb attacks, and the surrounding terrain is home to both Taliban fighters and the Islamic State group’s local affiliate.

This year’s August 19 celebrations mark 100 years of Afghan independence from British influence. The day was supposed to be one of national pride and unity, but was overshadowed by an IS suicide attack on a crowded Kabul wedding hall that killed at least 63 people.

In Kabul, local residents took to the streets to wave the black-red-and-green Afghan flag, but several public events to commemorate the date were scrapped over fears of a fresh attack. Afghan President Ashraf Ghani said: “We will avenge the blood of our people, every drop of it.” — AFP/Reuters

Kabul: Afghanistan’s president on Monday vowed to eliminate all safe havens of the Islamic State group as the country marked a subdued 100th Independence Day after a horrific wedding attack claimed by the local IS affiliate. President Ashraf Ghani’s comments came as Afghanistan mourns at least 63 people, including children, killed in the Kabul bombing at a wedding hall on Saturday night. Close to 200 others were wounded. AP