A day of protests in city; cops halt their march 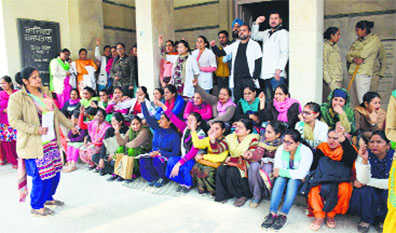 The nurses carried out the protest march from the Rajindra Hospital to the Fountain Chowk. The protesters were stopped by the police force. Karamjeet Kaur Aulakh, president of the association, said, “We were assured that we would be regularised in a month after our meeting with MP Singh on October 8, but until now our services are not regularised.”

The nurses called-off the protest in the evening after the medical superintendent of the Rajindra Hospital gave a written assurance of a meeting with Health Minister Brahm Mohindra and Finance Minister Manpreet Badal after panchayat elections.

It is pertinent to mention here that patients are at the receiving end as the OPD (outdoor patient department) of the Rajindra Hospital remain paralysed because nurses and ancillary staff remain off duty in morning and afternoon shifts.