MOHALI: In view of security concerns, the Mohali administration has rejected an application of Kashmiri Kaumi Sangharsh Samarthan Samiti, Punjab, seeking permission to hold a rally to lodge a protest against the revocation of Article 370 and 35-A by the Central Government. 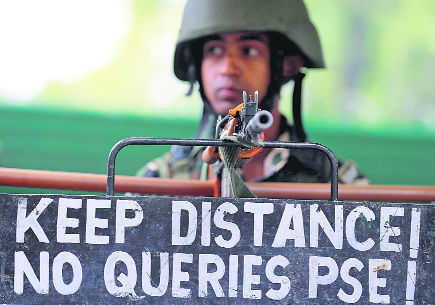 In view of security concerns, the Mohali administration has rejected an application of Kashmiri Kaumi Sangharsh Samarthan Samiti, Punjab, seeking permission to hold a rally to lodge a protest against the revocation of Article 370 and 35-A by the Central Government.

Mohali District Magistrate-cum-Deputy Commissioner Girish Dayalan said the organisation had sent an email to the administration yesterday seeking permission to hold an assembly to ‘support the Kashmiri people’s struggle’ at Dasehra Ground in Phase 8 here from 11 am to 4 pm tomorrow. The outfit then intended to hold a procession till the Mohali-Chandigarh border. “They sought permission for a gathering of around 8,000 persons, including women and children,” said Dayalan.

“We rejected the application while considering the guidelines of the Supreme Court and advisory of the Punjab Government, which stated that permission for such programmes should be sought before seven days of the scheduled event,” said the DC. He added that the administration also got reports from the police, who apprehended obstruction, annoyance or injury to persons lawfully employed or other general public and danger to human life and property, disturbance of public peace and tranquility and riots. Dayalan said there were many Kashmiri students in various institutes and such a rally might cause incitement to commit offence. The Mohali MC had also raised an objection, stating the protesters’ route would mainly pass through densely-populated area and the venue for the gathering was close to main private hospitals.

To stop protesters from entering the district, the police have made elaborate security arrangements. A senior police official said nearly 2,000 cops had been deployed. “We have summoned extra force. We will not allow protesters to reach here as they have no permission to hold a rally or procession,” said the official.