Have you been fascinated by the legend of the vampire? And the story of Count Dracula and his penchant for beautiful women captivated by his charm, yet unaware that he turns a blood sucker at night… Although horrific, English writer Bram Stoker’s work of fiction on the infamous Count’s exploits has mesmerised generations of readers. 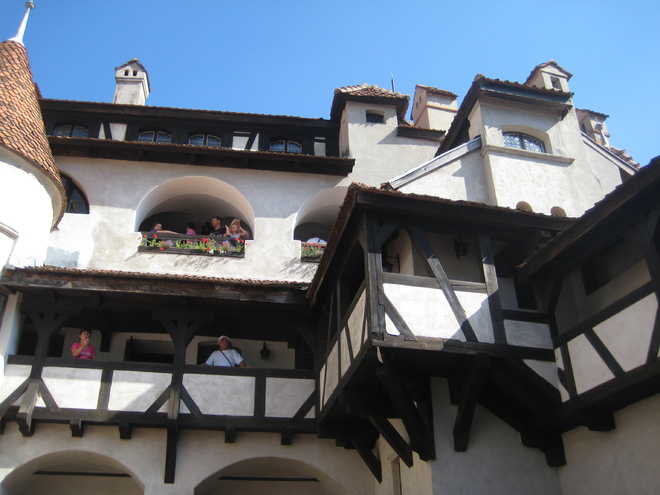 Have you been fascinated by the legend of the vampire? And the story of Count Dracula and his penchant for beautiful women captivated by his charm, yet unaware that he turns a blood sucker at night… Although horrific, English writer Bram Stoker’s work of fiction on the infamous Count’s exploits has mesmerised generations of readers. Made into movies, the narrative has only added to its fascination.

Excitement was building up as the little train from Oradea, a town near the Hungary-Romanian border, chugged through the beautiful landscape of Transylvania. Our destination was the town of Brasov where lies the Bran Castle that is supposed to be the lair of the blood-sucking character.

That horror stories have their own following was apparent on arrival in Bran, a pretty little town that was teeming with visitors. Romania is full of medieval castles and churches, but Bran Castle is special. The 13th century Gothic-style castle atop a hill looks almost like an illustration from a fairytale book. It is so beautiful that it is difficult to associate it with blood-sucking vampires.

After climbing up the steep steps to the castle, different floors open up to showcase artefacts, hand-woven carpets, furniture and weapons from the medieval times. It was the royal residence of Queen Marie, granddaughter of Queen Victoria and wife of Romania’s King Ferdinand I, who lived here during 1920 to 1957. It has now been turned into a museum where her collection is on display. You soak in on the marvels, gasp at their beauty, and then start to wonder: where is Count Dracula’s stuff? Alas, scholars say, he is a fictional character. There was never a blood sucking vampire-in-count’s disguise living here. However, there did exist a blood-thirsty count, who might have been the basis of Bram Stoker’s book.

According to researchers, Count Dracula’s character could have been based on one Vlad III, who ruled the Wallachia region of Romania in the 15th century. He was feared by the invading Turks, who called him Vlad Tepes or Vlad the Impaler because he punished victims by impaling them on stakes. Between 40,000 and 100,000 people are estimated to have been killed this way, understandably earning him the reputation of being bloodthirsty. Interestingly, the locals regarded him as a hero, who fiercely defended his land.

As for the name Dracula, it comes from a secret band of knights called the Order of the Dragon, created by Hungarian emperor Sigismund to uphold Christianity. Vlad’s father, who wore the society’s emblem, came to be known as ‘Vlad Dracul’ or ‘Vlad the Dragon’ (in Romanian, the word for dragon is ‘drac’) and Vlad III became Vlad Dracula, or ‘the son of the dragon’. Another discovery: Vlad III hardly stayed at Bran Castle and preferred his other abodes. However, perhaps due to its reputation today, a fleeting thought of the vampire legend is bound to invade your thoughts as you explore the narrow winding stairways, many of which are connected with underground passages.