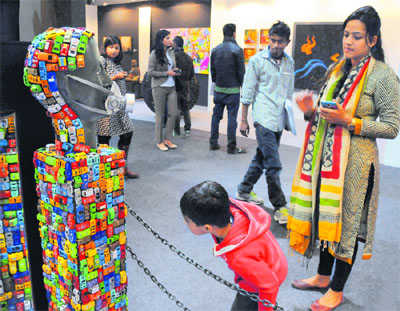 India Art Fair 2016, world’s fifth most attended fair, was home to a mélange of contemporary art expressions. Held at the NSIC exhibition grounds with more than 3500 artworks on display, larger-than-life sculptures were as perceptible this year as installations have been in its previous editions. If Paresh Maity and Sakshi Gupta breathed life into mammoth animal forms gleaming sculpture by evinced as much attention. Nantu Behari Das, who works with unusual medium like nails, brings to the fore intrinsic childlike temperament in his figurative works that immediately draw attention. Nantu juxtaposes the thought of tenderness with a medium as hard as metal, only to create the perfect illusion. Indian artist Shahid Parvez too likes to look at the world with a child’s mind. His work ‘Do I Need to Say Anything’ was as eye-catching and out of the box as many in a fair that showcases  art works by India’s most celebrated names. — NS