Years ago, walking the streets of Boston, I found myself peering through the show window of an antiquarian book shop where, among other artfully arranged things 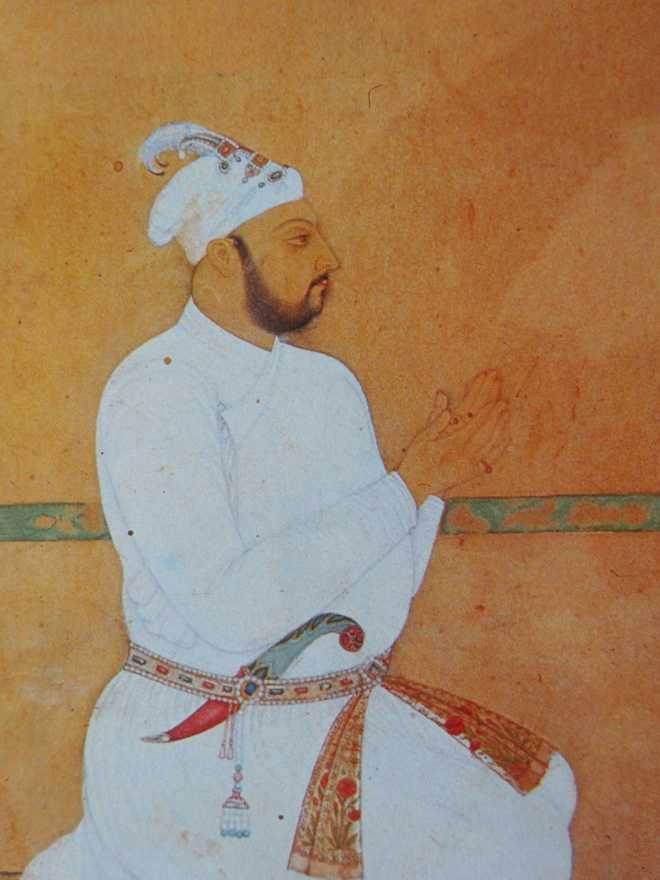 Years ago, walking the streets of Boston, I found myself peering through the show window of an antiquarian book shop where, among other artfully arranged things — volumes bound in gilt and leather, ancient maps invitingly spread out, seemingly rare old editions — lay open a quarto-sized book with elegantly calligraphed Persian text and an illustration that, seen at least from that distance, appeared Indian. Intrigued by the unlikely company it was keeping, for every other book there must have been in English or Latin or Greek, and in any case as I am never able to resist the temptation of acquainting myself with an old Indian object, or the time-laden smell of old paper, I entered the shop.

The gentle old man, who was keeping the shop, must have seen me peering at that book, standing on the pavement, and asked me as I entered if I was interested in anything particular. ‘Not especially,’ I must have mumbled, but ‘what is that Persian text in the window, I was wondering?’ I added. The gentleman hastened to say that he did not know anything about it; it had just come his way. But would I like to look at it? Of course, I said. The book was brought out of the show window and I was invited to take a seat and leaf through it at leisure. Gingerly, I turned the leaves, for the volume was apparently old, taking in illustrations that were all clearly related to astronomy, and came to a folio which contained some information. I could make out what it said: the work was Mir’at al Nujum, meaning the ‘Mirror of Astronomy’; it had been translated from Arabic into Persian by Hamid-ud-Din, son of Maulana Sheikh Muhammad of Ahmedabad; and illustrated by Abdul Rehman, son of Umar, in the port city of Surat for Nawab Tegh Beg Khan. The year? AH 1154 which translated into AD 1740. Naturally curious, the old gentleman asked what it was that I had been able to read, and I told him. Exactly. In fact, I offered to write down that information for him since buying was not my intent and it was something I would have liked to do in exchange for his courtesies. Grateful, the gentleman accepted the offer. I wrote it all out on a small sheet of paper, and left.

Two years or so later, I was in San Diego at the home of Edwin Binney, the great collector, going through his paintings when, suddenly and with obvious glee, he said he wanted to show me his latest acquisition. And, saying this, pulled out, before my startled eyes, the very same volume on astronomy that I had seen in Boston. Pasted on the inside was the note in my hand that I had written for the shop-owner. Apparently, knowing of Ed Binney’s wide interests, he must have offered, and sold to him, the volume. The same Mir’at al-Nujum.

I realise that I have gone on for too long with this ‘story’, and must get back to the volume, and others of its kind, for there are a great many of them, advances in astronomy being one of the glories of the Islamic world. Famous names crowd the field: the Caliph al-Mamun, al-Khwarazmi, al- Farghani, al-Kindi, Mirza Ulugh Beg, to cite a few. Passionate, consuming curiosity about the worlds that are up there was a driving force of course, but along with it also went the interest of navigators who used to take Arab traders on long, perilous voyages on the seas in the medieval world. An astonishing body of work came to be created over the centuries, some treatises drawn upon with gratitude by scholars in Europe, and acquired with pride by great libraries, like the one assembled for the Nawabs of Rampur, the Raza Library. In a typical work of the kind that Ed Binney’s acquisition represented, constellations were visualised in figural terms. One comes upon signs of the zodiac and constellations, of the northern and southern hemispheres: one sees Leo and Scorpio and Aries and Aquarius, Bears and Dragons, Ducks and Swordsmen, Snakes and Turtles, Men with arms raised, Warriors standing on one leg while holding a severed head in a hand.

There is remarkable richness of imagery and while the scientific nature of the visualisations might escape the average reader of these texts, the illustrations can be extremely absorbing. To take examples: in the Surat manuscript there is a superbly drawn image, and its mirror image, of the constellation Tinnin, which the painter renders as a writhing, coiling ‘dragon’-like serpent with a wavy tail and an eager, menacing head with expressive eyes and flicking tongue. In al-Sufi’s Suwar al-kawakib, now in the Raza Library, the sign Leo, as ‘al-Asad, can be seen as a lion moving majestically forward, eyes sharp and keen, the gait firm, long tail whipping the air. This is how it went on, in manuscript after manuscript, in the Islamic world.

In the holy Koran, it is written (sura 16): “(God sets on the earth) landmarks, and by the stars (men) guide themselves.”