So that they can engineer their dreams

Petite, all of 17 years old, yet a poise that belies her age, Gagandeepa walks into the room with an intriguing combination of diffidence and confidence. 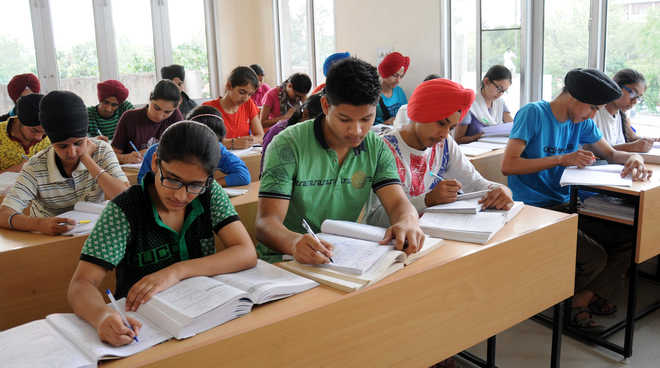 Driven by their desire to achieve, Gagandeepa, Manish Rawat (front left) and their batchmates get the help they need from organisations like the Bhai Jaita Foundation

Petite, all of 17 years old, yet a poise that belies her age, Gagandeepa walks into the room with an intriguing combination of diffidence and confidence. She has come a long way, but there is much to do yet.

Her journey is one of transformation. The fourth and youngest child of Jamal Khan and Parveen from Achal, a village 12 km from Nabha in Patiala district, she represents hope for a family that almost dropped out of the educational mainstream. Her eldest sister passed out of Class XII and then took vocational education at an industrial training institute (ITI), and other siblings, too, did not get past school — they trained for work... they had no option, economic necessity undermined their educational dreams.

Gagandeepa, however, was driven. She left the comfort of her home and the local school in Achal to improve her academic prospects. She, along with three students, two girls and a boy from her village, took an exam and got admission in Jawahar Navodaya Vidyalaya (JNV) in Fatehpur Rajputan village, near Patiala. JNVs are government-funded residential and co-educational schools for gifted rural students.

“We wanted to study, but were new to an English-medium school. There were many difficulties for us in the first year, but our teachers were very helpful,” says Gagandeepa, as she recollects how the teachers used Punjabi extensively to help bridge the gap. She particularly remembers her teacher, “Rachna ma’am”, for her encouragement. Gagandeepa’s face scrunches up as she also narrates the inevitable lonely nights of crying in the quilt while missing home.

Gagandeepa had a role model in her sister, Yasmin, who topped Class VIII. “I too topped in Class X with 9.8 GPA,” she says proudly. Financial constraints hobbled the growth of the family of a person who earned his living by working with his hands. While her siblings could not grow, Gagandeepa was fortunate.

Along with the other students at JNV, she applied for a scholarship offered by the Bhai Jaita Foundation (BJF), which seeks to help socially and economically disadvantaged individuals through its rigorous academic programme, modelled on Bihar’s Anand Kumar’s successful ‘Super 30’. Bhai Jaita was the Sikh who brought the severed head of Guru Tegh Bahadur to Guru Gobind Singh from Delhi to Anandpur Sahib for cremation. Bhai Jaita was part of ninth Guru’s entourage.

The BJF is headed by a former Director of the PGI, Dr BNS Walia. It came about when Chicago-based Kulmeet Singh sold his software company in 2006. He took out daswand (tithe) for philanthropic activities. Largely a family supported endeavour, all board members donate to charity, says Kulmeet’s father Harpal Singh, managing trustee of the foundation. Harpal was an engineer in PWD Punjab before a scholarship helped him earn an MBA at Harvard Business School. He worked as a management consultant before devoting himself to charitable causes in 1985.

Students, who are selected after examination and interviews, are given free board and lodging for two years. They enrol in a regular school and study for the IIT-JEE examinations. This year 23 students of the foundation appeared for the examination, 18 of them (77 per cent) qualified for the IIT Advanced Test — seven of them girls (39 per cent), including Gagandeepa.

The success rate is remarkable, as Harpal gladly points out, when compared to the overall percentage of 16.4 per cent for successful candidates and 20.2 per cent for girls. While, for overall candidates, the result is skewed heavily in the favour of urban areas, the foundation’s wards reverse the trend. The students are also from various religious denominations.

The Punjab Government’s ‘Super 50’ project too attempted to replicate the ‘Super 30’ project. It was run from 2000 to 2015, when funding ran out. Only six out of the 200 students reportedly made it to the JEE Advanced Test. The contrast between the two endeavours highlights the sub-par performance of the government. Punjab also launched a “meritorious school” programme, which expanded the concept. Such schools were opened in various districts but they too have not performed well. For example, only 10 of the 210 students of the Mohali school have qualified for the JEE Advanced this year.

“Even though Bhai Jaita was born in a family stigmatised as untouchable, the enabling environment created by the Gurus made it possible to transcend all barriers to reach heights not only as a hero but a scholar and poet as well,” says Harpal Singh. “Passion propels BJF volunteers and office-bearers. “Several persons from many walks of life are working with dedication for the foundation and as local parents for students. Many have contributed in other ways, including financial. A notable contributor is the well-known math teacher Prof Rajinder Arora, who is revered by the students, and his team that provides free coaching,” he acknowledges.

Professor Arora earned his MPhil in Mathematics from IIT Kanpur and runs the RN Classes coaching institute in Chandigarh. “I have been in touch with this organisation for the past four years, when they ran camps for NV students,” he says. “These children are a bit more sincere than typical Chandigarh students, but they don’t have the same exposure. They are, however, passionate about doing something and are ready to work longer, as many as seven to eight hours a day. Their lack of language skills is an issue at first, but they work hard to get better.”

The BJF started small and are now scaling up. “We ran short courses earlier, but this is the first batch of our students who are passing out after two years,” says executive director for Academic Work, Baldev Raj Dhand. Lack of resources is a major millstone for those who want to study further.

The transformation in the life of such students is tremendously satisfying, Dhand says, as he recounts an incident when a boy walked for an hour and a half to save on rickshaw fare.... He came in with his books and belongings crammed into an empty, clean cement bag. The place of pride among the alumni of the foundation goes to Amandeep Singh who, along with Gobinder Singh and Minakshi, is now at the IISER, Mohali.

Naturally, there are those who are better off economically than others, and among them is Manish Rawat, whose father Laxman Singh teaches mathematics. Manish, who has the swagger and the stocky build of a footballer, studied at Morinda till Class VIII when he joined JNV Ropar to study in Class IX and X. He did well, and through teachers and students, learnt about the foundation and what it had done with its short-term courses.

“We knew that this was the first batch, so it was a risk, but they had a good reputation, and so I applied. I got admission. The hostel is like any other boarding house, but we have AC classrooms, good teachers and good support from the school,” says Manish.

The students attend classes at Saint Soldier International School, located a convenient walking distance from the Kendri Sri Guru Singh Sabha office in Sector 28, where the foundation is located. The school has taken in most of the students. The students go there for their morning PT at the crack of dawn and also attend classes. They are expected to attend extra classes in the foundation every evening and then devote time to study on their own.

Did they have any problems adjusting with the regular students at the school? Individual equations seem to be at work. Gagandeepa says she mainly sticks with her friends whereas the more outgoing Manish has a rapport with a wider group. What is the difference between the two sets of students? “We have our goal fixed, while they don’t seem to be motivated towards any goal,” Manish perceptively notes. “We have come so far from our parents — we have to do something. We see each other and that motivates us to study,” says Gagandeepa.

Even as these students are preparing for the JEE Advanced test for 2016, knowing that not everyone will realise their dream of going to the IITs, there is no doubt about the grit and determination of these bright young individuals who have overcome various disadvantages, and with some crucial assistance provided at right times, already expanded their horizon from ITIs to IITs.