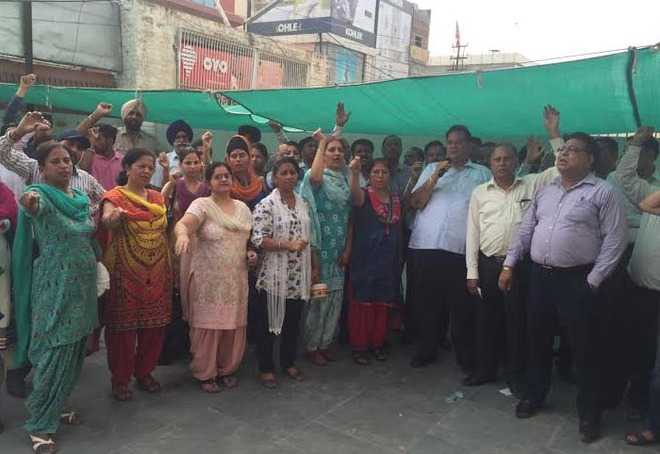 Employees of associate banks protest outside the SBoP zonal office in Bathinda on Friday. A Tribune photograph

Addressing the demonstration, Pawan Jindal, general secretary, SBBJ Employees Union, Punjab, said the SSBEA had held a series of programmes against merger and against the discriminatory attitude of the SBI management towards employees of associate banks.

“The attitude of the SBI management is so adamant that it is not even caring for the government guidelines in case of compassionate appointments in the SBI and associate banks. The SBI has altered the guidelines to such an extent that it has virtually denied appointment on compassionate ground,” Jindal said.

The strike will be observed by 10 lakh employees under the banner of United Forum Bank Unions.

Vice president of the union, Narinder Bansal, said for the past one year, the top management of the SBI was maintaining that there was no plan to merge the associate banks as the SBI could not afford it and there would be no benefit accruing to the SBI by such a merger. “Now, the SBI management is also imposing CPS unilaterally in associate banks, which is against the right of collective bargaining and associate banks will fight to preserve the collective bargaining,” he said.