BATHINDA: The protesting lawyers today postponed their agitation till Monday. 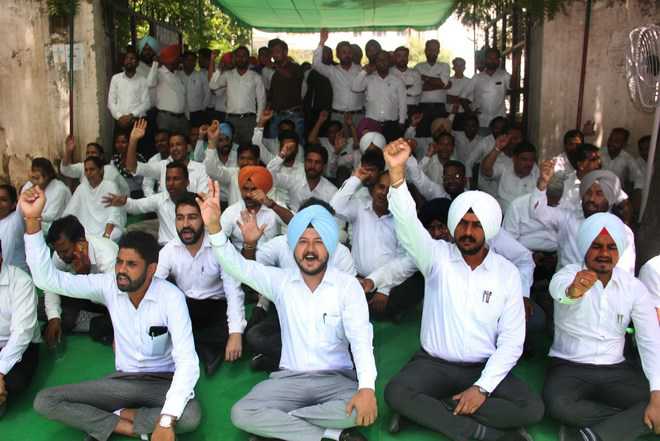 Lawyers stage a protest outside the SSP office in Bathinda. Tribune photo

The protesting lawyers today postponed their agitation till Monday. The protesting lawyers blocked traffic on road for a short while before calling off the strike around 1 pm. Scores of litigants had to suffer as hearing of several cases were postponed. Kamaljit Kuti, president of the District Bar Association (DBA), said: “We demand cancellation of FIR registered against advocate Navdeep Jeeda.

The police, accompanied by two other persons, had beaten up Jeeda. These persons took law in their hands and must be booked for launching assault on Jeeda. We demand a thorough probe in the case so that strict action can be initiated against actual culprits

Meanwhile, the court granted interim bail to Navdeep Jeeda and had been directed to cooperate police in investigation.

The protesting lawyers alleged that without holding any inquiry into the incident, the police registered a case against advocate Navdeep Jeeda. They said no action had been taken on the complaint of Jeeda against Ranjit Singh, who fractured his nose.

In view of three consecutive holidays, the DBA has decided to postpone their strike until Monday when they are expected to resume it.

“We are waiting for the response of concerned authorities in the matter and if our demand of cancellation of FIR is not met, the struggle for justice would be intensified in the coming days,” added Kuti.