Bitcoin has attracted more attention than is perhaps justified, usually for all the wrong reasons. 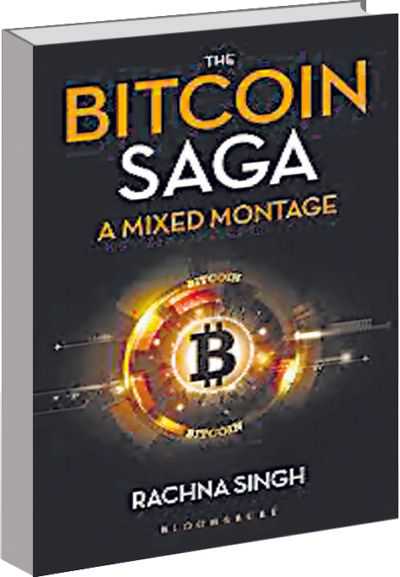 Bitcoin has attracted more attention than is perhaps justified, usually for all the wrong reasons. It is hard to discuss whether it is a tool of the anarchists to buy drugs on the dark-web supermarkets? Is it a path to quick millions? Is it a disruptive force of the financial markets? Or is it an instrument to make the world a fairer place, as claimed by its ardent fans?

Dr Rachna Singh, an IRS officer with almost 30 years’experience, demystifies Bitcoin beyond the hype. She begins with tracing the genesis of the system that allows individuals to reveal their identity only when desired. Though Bitcoin is often associated with nefarious activities, the original motivation behind Bitcoin was not secrecy, but privacy. What's the difference? Secrecy is for hiding. Privacy, on the contrary, empowers one to reveal one's identity to the world selectively.

Singh has explained Bitcoin concepts with illustrations and in easy language.

There is a never-ending tension between innovators and regulators. Innovators and early adopters want a free hand. But, when innovation disrupts the financial stability of a country, regulators have to step in to protect the vulnerable population and root out illegal activity. Singh adequately explains the dry issues of regulation and tax frameworks of different countries.

Most countries have reacted with panic to the digital currency. Japan is perhaps the only country that has embraced the concept of Bitcoin, with grocery marts and salons accepting Bitcoin payments. Even though Bitcoin originated to bypass government controls, regulations are needed for mass adaption. Cryptocurrencies will attain a higher degree of credibility if these have the government approval. Countries like Canada, Switzerland and the Netherlands may soon launch their own virtual currencies.

Other challenges for mass adaption of Bitcoin are technological. Visa processes 47,000 transactions per second (tps) while Bitcoin tps ranges between seven to 10. Technology giants like Apple and Google do not accept Bitcoin in their mobile stores yet. Bitcoin transactions, once free, are now increasingly expensive. The biggest drawback of Bitcoin is the use of a massive amount of energy. Energy consumed by global Bitcoin networks is at the level of energy consumption of countries like Denmark. Despite these shortcomings, the author believes the arrow of progress will only move forward.

Bitcoin is promoted as a monetary revolution. Singh argues it is much more than that. She believes that the underlying technology will bring about far-reaching changes and impact the future of mankind. She dedicates an entire chapter discussing the impact of Blockchain, the underlying technology of Bitcoin, on governance, healthcare, agriculture, and many other industries.  The book predicts that Blockchain will lead to the generation of a vast number of virtual and physical economies around the world.

For a printed book with much information, to miss the index section is inexplicable. After a quick read, it is impossible to cross-reference information without the index. Readers are not going to re-read the entire book to find a particular piece of information.

Singh claims the aim of the book is to guide the reader through the technical, social, and financial intricacies of Bitcoin and ignite a sense of excitement about the virtual currency. In that she has clearly succeeded.