A 12-lane bypass (expressway) is soon expected to replace the existing 26-km long six-lane road that provides direct connectivity between the Badarpur border and Kelly village in Ballabgarh subdivision of Faridabad district. 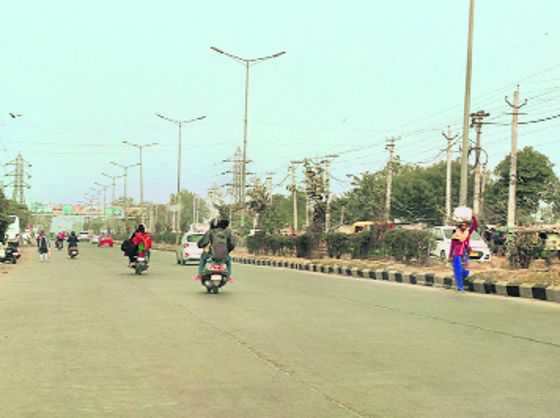 The bypass in Faridabad that is to be expanded to a 12-lane expressway.

A 12-lane bypass (expressway) is soon expected to replace the existing 26-km long six-lane road that provides direct connectivity between the Badarpur border and Kelly village in Ballabgarh subdivision of Faridabad district. The bypass is to be constructed at an estimated cost of Rs 2,500 crore and the district administration has handed over the 60-km road project to the National Highways Authority of India (NHAI), which has started the process to prepare its detailed project report (DPR).

The bypass that will be another milestone in the connectivity network of Faridabad district is likely to provide huge relief to people travelling in this part of the National Capital Region (NCR), especially those moving between Delhi and Palwal and between Faridabad and Noida and Ghaziabad cities of Uttar Pradesh. It will run parallel to the National Highway No. 2 crisscrossing Faridabad city and the district with a view to decongesting traffic on the highway and providing direct access to Kalindi Kunj in Delhi and the DND expressway of Noida from Mandkola in Palwal district. Those travelling to Mathura, Agra and Vadodara in Gujarat from Delhi or from Uttar Pradesh will have a smoother travel, as they will no longer be required to take the old route on the National Highway No. 2, which remains busy during peak hours due to local vehicular traffic. The bypass will provide direct access to the Delhi-Vadodara-Mumbai Expressway, at present under construction. Though the National Highway No. 2 has also been widened to six lanes and several flyovers have been built on it at a cost of Rs 2,900 crore, the travelling time increases during peak traffic hours.

“We will soon be starting the process to acquire land for the project to expand the road from six to 12 lanes,” says an official of the NHAI. He adds while the formalities regarding the DPR preparation has been done, it may take a couple of months to launch the work on the ground. Though the project was conceived several years ago, it was finalised in 2017. The biggest hurdle, according to the officials concerned, was perhaps the clearance of a large number of encroachments on both sides of the existing bypass. Over 5,000 shanties on the left side and constructions on the right side of the road (from Delhi) have made travelling on the stretch cumbersome. While the state government has notified Section 3-A for land acquisition, the NHAI will acquire at least 70-metre wide land for the entire stretch of the 60-km bypass that will run from Delhi to Mandkola village in Palwal.

Krishan Pal Gurjar, Faridabad MP, says the bypass is vital for the NCR and the notification of land acquisition for the entire stretch has been issued. He adds it will ensure smooth movement of traffic between Delhi and Faridabad and between Delhi and states like Uttar Pradesh, Rajasthan, Gujarat and even Maharastra. “The main road will be of six lanes, while the bypass will have a service road of another six lanes (three lanes on either side). There will be a flyover at every intersection or crossing on the highway. It will cross over the National Highway No. 2 at a couple of places before culminating at Mandkola village in Palwal,” he says. The project is likely to be completed in two and a half years.