AMRITSAR:Amritsar is no longer a destination of day-trippers. 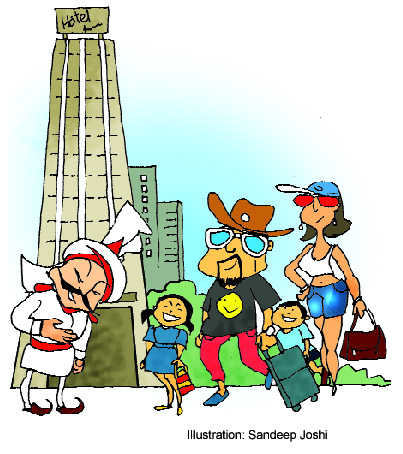 Amritsar is no longer a destination of day-trippers. The holy city is fast becoming a major attraction for tourists in the Golden Triangle circuit — Delhi, Agra and Jaipur — as they find value in spending at least two nights in the city and visit added attractions such as the Heritage Village, Gobindgarh Fort, Ram Tirath, War Museum and Sadda Pind.

While the Golden Temple is still the centre of attraction, promotion of other destinations has prompted tourists to prolong their stay for two nights in the town. Earlier, they used to spend not even a single night as their itineraries to pay obeisance at the Golden Temple and to watch the retreat ceremony at Attari-Wagah checkpost was a half-day affair.

Local tourism industry experts say tourists from the National Capital Region (NCR) have an added attraction in the cultural capital of Punjab. “Earlier, their choice was mostly confined to Agra and Jaipur. As a result, luxury hotels in the town have seen a sharp 50% jump in their revenue as compared to last five years,” said general manager of a leading five-star hotel in Amritsar. Other high-end hotels in the town are Hyatt, Radisson Blu, Ramada, Holiday Inn and Taj Swarna.

Most of the tourists visiting Amritsar are from Delhi and the adjoining NCR. A large number of people from Mumbai, Kolkata and Gujarat also visit the city. Around 20% of the visitors are non-resident Indians (NRIs) and international tourists, mainly from the UK, Australia, Canada and the US.

“The character of the city has changed over the years with the addition of several new projects, including quality accommodation,” said Jitender Pal Sohal, General Manager, Radisson Blu.

Operationalisation and marketing of sites like the Heritage road, the road leading to the Golden temple, the Gobindgarh Fort, located inside the city, Valmiki temple, believed to be ancient hermitage site of the Sage at Ram Tirath area, around 10 km from the city, the War Museum and Sadda Pind, both on Amritsar–Attari road, have also played a major role in attracting tourists and holding them for a couple of days, he said.

Hotels, Restaurant and Resort Association of Punjab chief executive officer APS Chatha said due to immense tourist attractions Amritsar has earned the distinction of being the second city in the North after Delhi to have maximum five-star hotels. He said there are over 500 hotels, lodges, resorts, inns and five-star properties. This list includes 40 luxury properties in different star categories. The properties club together offer around 5,000 rooms under various categories in the city.

Due to the demand, several new facilities, especially in the luxury segment, have been proposed in the vicinity of the Circuit House, the Amritsar airport complex and Ajnala road.

The Punjab Heritage Tourism Promotion Board (PHTPB) conducted a survey of the footfall of tourists in the city in 2011-2012 and found that around two crore people had visited in that financial year. Since then, no new survey was conducted. However, hospitality players believe that on an average, the visitors’ count stood between 50,000 and 55,000 which rises to over 62,000 on weekends”, he said.