India under US pressure to stop importing oil from Iran : The Tribune India

India under US pressure to stop importing oil from Iran

NEW DELHI:India is facing tremendous pressure following a categorical message from Donald Trump to American allies and partners to stop all oil imports from Tehran by November this year. 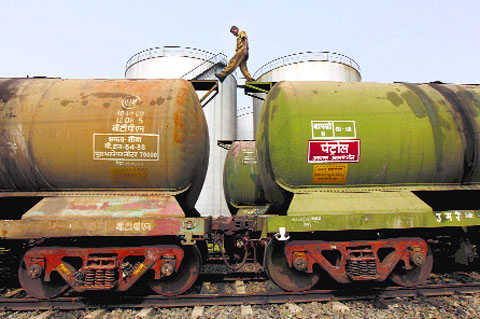 In the last fiscal, Indo-Iranian bilateral trade stood at around $13 bn with more than $10 bn accounting for Indian imports of oil. Reuters

India is facing tremendous pressure following a categorical message from Donald Trump to American allies and partners to stop all oil imports from Tehran by November this year.

According to sources, Trump wants to see visible steps taken in this direction in the wake of the US withdrawal from the historic Iran-nuclear deal.

However, for now, India is denying reports of having bowed down to Trump’s orders. Responding to a specific question, Ministry of External Affairs spokesperson Raveesh Kumar on Thursday said, “The statement that has been made by the US state department talks of reducing oil imports to zero by November 4. It was not India-specific. We will take all steps to ensure that our energy security is not compromised.”

Though the messaging from Washington is loud and clear, which resonated even as US Ambassador to UN Nikki Haley spoke in Delhi. “The Tehran regime is the hidden — and sometimes not-so-hidden — force behind most of the conflicts in the region. And its aggressive ambitions reach much further abroad. Iran’s pursuit of a nuclear weapon threatens us all,” she said.

Later, in an interview to a TV channel, she emphasised that “India should rethink on its relations with Iran”. “All of us have to rethink who we choose to do business with. I think India should also decide is this a country they want to continue doing business with. Yes, I had that conversation with PM Modi. It was a constructive conversation. I think for the future of India, future of resources, we will would encourage them to rethink their relationship with Iran,” she said.

Iran is the third largest supplier of crude oil to India after Iraq and Saudi Arabia. India and Iran have also been exploring options of trading in Indian rupee to secure non-oil trade with most banking and payment channels blocked due to the US-led sanctions. The situation will also lead to serious concerns for India that has invested heavily in the Chabahar port project.