CHANDIGARH:Punjab and Chandigarh excise departments have started sending notices to those who have not filed their summary returns since July last despite having GST registration numbers. 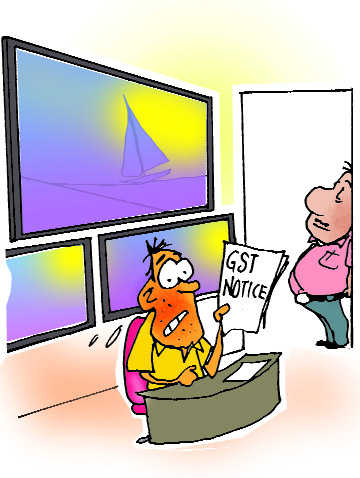 Punjab and Chandigarh excise departments have started sending notices to those who have not filed their summary returns since July last despite having GST registration numbers.

The compliance rate related to filing of summary returns in Punjab is 87.5% in the first quarter of the current fiscal whereas in Chandigarh, it is 84%, government sources said.

“It is estimated that the number of non-compliant entities would be marginally higher in the first six months of the launch of GST,” a source said. There are around 4.1 lakh GST-registered businesses in Punjab and 26,542 in Chandigarh.

GST registration is mandatory for enterprises with an annual turnover of Rs 20 lakh and above. They are expected to file a summary return (GSTR-3B), a monthly self-declaration return which is mandatory even if the registered entity has not made any transaction in the particular period.

The industry has confirmed receipt of taxman notices for the non-compliance with the instruction to file returns for the first six-months since July last year or face action. The authorities have given one week to the defaulters for compliance.

“Being a registered taxpayer, you are requested to furnish GSTR-3B return from July to December and to discharge the resultant tax liability for the aforesaid tax period by due date. But you failed to submit your return timely…,” read a notice sent to a Chandigarh-based dealer. The department in Punjab is, however, making calls in addition to sending notices.

Non-compliance would ultimately lead to cancellation of the GST identification number (GSTIN). Such defaulters would also invite the taxman’s scrutiny and could be asked to pay the tax liability after assessment, department sources said.

“If returns aren’t filed even after notices, the department can undertake tax liability assessment on the basis of sales record of a particular assessee and fix the tax liability,” a tax official said.

There are also defaults due to ignorance, industry experts said. There are some GSTINs that could not commence any business  for various reasons. There are others who are victims of technical errors such as mismatch of PAN numbers. They are forced to opt for a new GSTIN in addition to old one. The tax department sources said in all such cases the old GSTIN is, however, treated as active entities and they are expected to file returns.

“There are many people who did not start any business venture and now wish to cancel their GSTINs. But they have been asked to file returns for the period of holding the GSTIN before the same could be cancelled,” Chambers of Chandigarh Industries adviser Keshav R Garg said.

Return must even if no transaction