JAMMU: With almost no online transactions taking place in the city due to the suspension of the mobile Internet service since August 5, the banks are unable to meet the rising demand for cash at the ATMs. 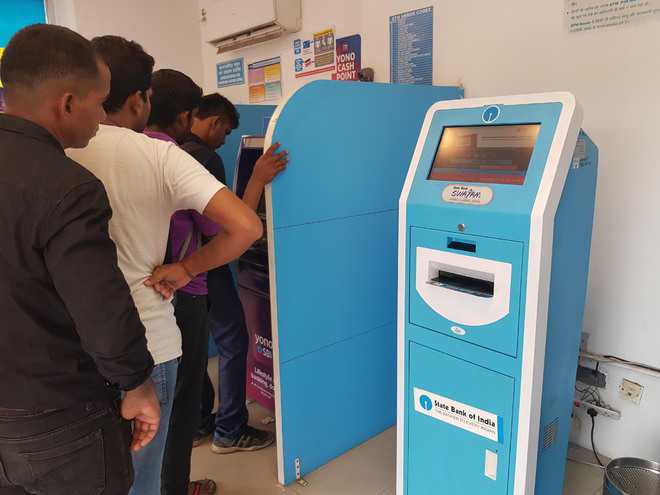 People queque up at an ATM in Jammu on Tuesday. Tribune Photo

With almost no online transactions taking place in the city due to the suspension of the mobile Internet service since August 5, the banks are unable to meet the rising demand for cash at the ATMs. As a result, most of these machines have gone dry in the winter capital.

“I had to visit my hometown Reasi for which I required Rs 30,000 as no one is accepting card payments these days. I visited four ATMs of the SBI at Rehari, Aquaf Market in Gandhi Nagar, Last Morh in Gandhi Nagar and then the head office of the bank at Trikuta Nagar. All ATMs were out of cash. For four hours, I kept on moving from one ATM to the other,” Vishal Mahajan, an engineer at Jammu.

“The banks should ensure that all ATMs are filled with sufficient cash. They know it well that all transactions are being done in cash only. How will people survive?” he asked.

Due to the Eid celebrations on Monday, the demand for cash had also increased. However, with the banks closed since Friday, the ATMs ran dry. Many locals claimed that bank staff usually skip filling ATMs on holidays.

“People are withdrawing more cash these days, as they feel that the restrictions are likely to continue. The Eid celebration had also raised more requirement for cash last week, which made it difficult for the banks to meet the demand,” said Mohd Tariq, a local.

However, no official was available for comment as the banks have been closed since Saturday.