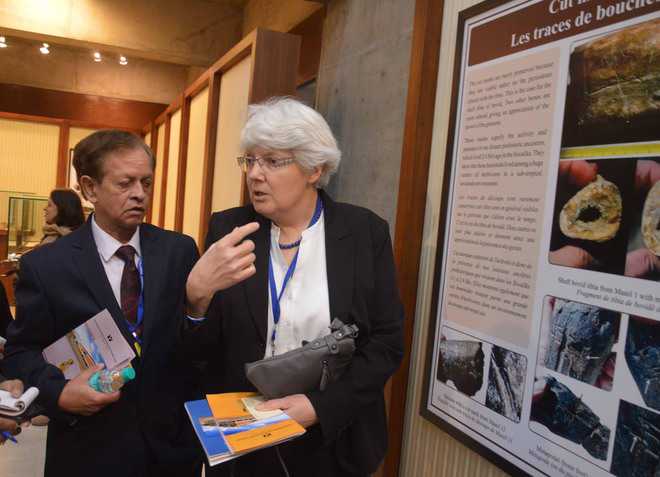 Prime Minister Narendra Modi and French President Francois Hollande today also visited the Government Museum and Art Gallery in Sector 10 and saw fossils found jointly by the Indo-French team of scientists in the Shivalik foothill. These fossils were said to be 2.6 million years old.

Both leaders spent nearly 10 minutes in the museum. These fossils were found during the research headed by India-based Society for Archaeological and Anthropological Research (SAAR) and the France’s National Scientific Research Centre (CNRS) and the Department of Prehistory of the National Museum of Natural History.

Dr Mukesh Singh, a PhD in pre-history and quaternary geology from France, who showed these to both the leaders, said it was a great feeling. He said these were the oldest “human activity”.

Along with Dr Mukesh Singh, Dr Anne Dambricourt Malasse, another expert from France, also explained about these archaeological excavations to both the leaders.

More than 2,000 fossils of different herbivores, including stegodon, an ancient elephant with tusks up to four meters, and Sivatherium, a giant giraffe, were dug up from Masol village in Mohali which was surrounded by Shivalik hills.

According to the experts, before this find, the oldest sites were in the Rift Valley of Ethiopia dating back to 2.58 million years.

The team had also found 14 fossils of leptobos, pre-historic ancestors of modern-day cows that weighed up to 320kg. These rare fossils, excavated between September 2009 and March 2015.