3 yrs on, scrapped notes find their way into Sec 29 temple

CHANDIGARH:Three years after demonetisation, scrapped Rs 500 and Rs 1,000 notes continue to find their way into donation boxes at temples in Chandigarh. 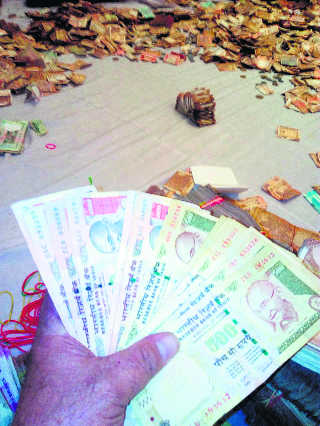 The scrapped notes found at the Sai temple, Sector 29.

Three years after demonetisation, scrapped Rs 500 and Rs 1,000  notes  continue to find their way into donation boxes at temples in  Chandigarh.

While incidents  of getting an odd scrapped note or two are  common, the Sai temple in Sector  29  has  received Rs 13,000 in scrapped notes.

Sources said eight notes  of Rs 1,000  and 10  notes  of Rs 500 were  found when office-bearers  of the management committee of the temple were counting the  offerings  today.

The committee  opens the donation  box  of the  temple  once a  month.

Lakhs of devotees  visit the  temple every  month. The temple  gets  an average of Rs 30  lakh to Rs 40  lakh every  month as donation from devotees.

“We have received Rs 13,000 in demonetised notes as offerings and are yet to decide what  to do with  the  notes,” said  one of the office-bearers of the temple.

He said they had kept the demonetised notes in the temple chest  for  now  and would decide what to do with these as per law.  Keeping banned notes  invites  punishment so devotees find offering  these in temples the best  way to  get rid of these. The government has notified a law that makes  holding of over 10 scrapped notes punishable with a minimum fine of Rs 10,000.

Members  of the  management committee  said offerings in the form of cash had seen a surge at religious places  soon after the government     announced  the withdrawal  of high-value bank notes on November 8, 2016. The Sai temple  had received Rs 8 lakh in the form of demonetised notes of Rs 500 and Rs 1,000 when the management opened up the donation box on November 15, 2016.