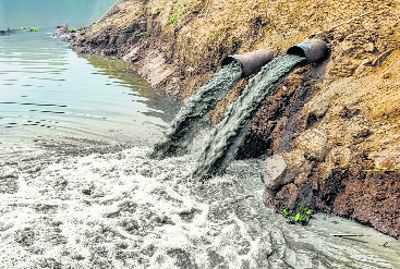 Justice Pritam Pal (retd)-led executive committee, mandated to monitor the pollution level in the Ghaggar, has raided seven water-polluting industries in industrial areas of Panchkula and Chandigarh and found their treatment plants non-functional.

The raids at two places in Chandigarh were conducted on Friday and at five places in Panchkula on Saturday. None of the local officials was taken along. The treatment plants at all industries were found non-operational. The discharge from these industries goes into drains and ultimately into the Ghaggar.

After the submission of the executive committee’s report tomorrow, action will be taken against the industries, which could include fine, sealing or even snapping the power and water supply connections.

The National Green Tribunal (NGT), on August 7, 2018, had appointed Justice Pritam Pal, a former Haryana Lokayukta, as the chairman of the executive committee.

Originating from the Shivaliks in Himachal Pradesh, the Ghaggar progresses from the east to the southward direction through several districts of Punjab and Haryana before moving towards Pakistan through Rajasthan. The NGT had ordered, “The authorities concerned in the states of Himachal Pradesh, Haryana, Punjab and the UT, Chandigarh, will cooperate and co-ordinate with the executive committee. The committee can seek any scientific and technical assistance as may be required from any relevant authority.”

The National Human Rights Commission had taken suo motu notice of a news item published in The Tribune on May 12, 2014, “Stench grips Mansa’s sacred Ghaggar river”. The Ghaggar had turned into a polluted water body on account of discharge of effluents, industrial as well as municipal. On the reference of the NHRC, the NGT took over the case in 2016.

What the committee found

Besides carrying out surprise checks, Justice Pritam Pal also visited the Sukhna choe and the N choe on Saturday.

It was found that sources of water pollution were plugged in the Sukhna choe but at the N choe, water appeared brackish. It was ordered that water samples would be taken from the N choe and the report would be submitted to the executive committee.

Both the Sukhna choe and the N choe merge with the Ghaggar.