Architect who did more than make a livelihood

(You’ve changed me into such a noble person I’ve become one in a million. 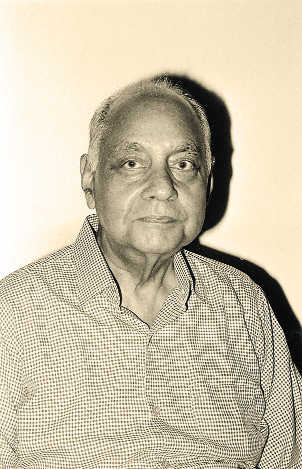 (You’ve changed me into such a noble person I’ve become one in a million. You touch one’s personality in such a way, he starts feeling one with the whole of humanity)

When I started researching about the late Aditya Prakash, a former Principal of the Chandigarh College of Architecture, I discerned a common appreciation of his multi-faceted personality among his friends, admirers and students along the lines of the Urdu couplet I’ve quoted above.

Prakash lived in his life the thought behind this couplet that endeared him in a very special way to those who came into contact with him.

He was a man of many parts in the true sense of the term and was considered to be a Renaissance man by his friends and admirers. Prakash was born in Muzaffarnagar, UP, and over his decades of stay in Chandigarh, he distinguished himself as an architect, painter, academic and author, and, above all, as a friend, philosopher and guide to many.

He began studying architecture in August 1947 in London. Briefly, he studied art at the Glasgow School of Art, before joining the Chandigarh Capital Project as Junior Architect under Le Corbusier on November 1, 1952. Remarkably, Prakash could come up with his own observations, which, written accounts of those times tell us, were welcomed by Corbusier.

In an interesting conversation between Prakash and one of his students, Rajneesh Wattas, who later became the Principal of the Chandigarh College of Architecture, the latter asked him whether he (Prakash) would call Corbusier “dictatorial” or “arrogant”. Prakash’s reply was, “I would put it this way. He had struggled all his life to have his ideas accepted and this acceptance came to him only after the Second World War. So when the opportunity came, he was anxious to implement his ideas without discussing them; therefore, one has to make allowance for a man of genius.”

Prakash was picked up to be the Principal of the C handigarh College of Architecture for his deep interest in academics and research. He joined the college on December 13, 1967, and retired on March 31, 1982. His students, in particular, were fond of him for his focused involvement in whatever he took up.

In one of his writings in the early 1980s, Prakash outlined his manifesto as an architect: “I like to think that ‘architecture’ is an attitude of life. Undoubtedly one becomes an architect to earn a livelihood. But in the absence of a cultivated way of looking at life, the practice of profession becomes mechanical…”

In 1983, Prakash’s booklet “Reflections on Chandigarh” was published in verse with an “afterword” by Mulk Raj Anand in which Anand writes, “…you accept the main plan of Le Corbusier for what has come to be called the ‘City Beautiful’, based on the order of ‘Working’, ‘Care’, ‘Living’, and ‘Circulation’ of ‘Man’.

He goes on to say, “You are quite right when you say that what was supposed to be a ‘pedestrian’s paradise’ has become a motorcar city, with roads not amenable to bus service, forcing people to use the noisy scooter, and muscle machine of the cycle rickshaw. The parks in the sectors remain empty.”

There is a pencil sketch of Corbusier at the beginning of the booklet which is captioned, “The most profound ARCHITECT of the Industrial era.”

Wattas, architect, author and landscape designer was a former student of Prakash. “I’m very lucky. I was associated with Prakash in three different ways: As a student, as faculty in the Chandigarh College of Architecture and with him as my mentor and an inspirational role model. His clarity of thought and knowledge left a deep impression on me,” says he.

Virendra Mehndiratta, Hindi short-story writer, who was a very close friend of Prakash for 50 years, likes to use a Punjabi expression to describe their friendship, “Humne is dosti ka sukh manaya” (we lived our friendship to the full.)

Prakash was a sincere and a genuine person who while living life on his own terms was constantly involved in doing hard work, says he. By his association with Le Corbusier, he had realised early enough in life the concept of saadgi mein sundarta (beauty in simplicity). He was all praise for the creative endeavours of his friends and treated their work with warmth and offered praise freely.

Prakash worked in the Chandigarh Capital Project from 1952 to 1963. During this time, he designed several public buildings in Chandigarh, including the District Courts Building, The Tagore Theatre, the Chandigarh College of Architecture, The Central Craft Institute besides Punjab Agricultural University in Ludhiana.

He died in harness, in the true sense of the word, on August 12, 2008, on a train in Ratlam in Madhya Pradesh.

He was on his way to Mumbai to perform, ironically, in a play, “Zindagi Retire Nahi Hoti”. Paying tribute to Prakash, Mehndiratta said, “He brought together enlightened scholars, writers and artistes of all hues and formed a discussion group, which is now known as the Aditya Prakash discussion group. It’s still active.

“When a person like Prakash departs, our life force too diminishes. We do not realise how much we lose when such sincere and honest people pass away,” he says.

Reflections
In the afterword to Aditya Prakash’s booklet “Reflections on Chandigarh”, published in 1983, Mulk Raj Anand writes, “You accept the main plan of Le Corbusier for what has come to be called the ‘City Beautiful’, based on the order of ‘Working’, ‘Care’, ‘Living’ and ‘Circulation’ of ‘Man’. What was supposed to be a pedestrian’s paradise has become a motorcar city, with roads not being amenable to bus service, forcing people to use noisy scooter and muscle machine of cycle-rickshaw.

Say can’t do so owing to restrictions put by Indian govt in ...

Nothing confirmed so far, probe on; says state govt

During Instagram live session with Rohit Sharma, Yuvraj made...