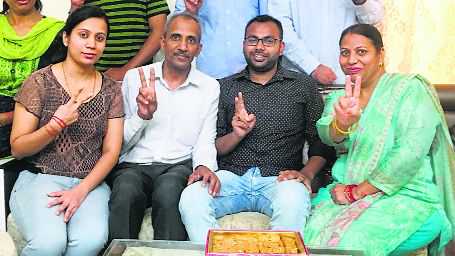 Rishabh Gupta with his family members in Patiala on Sunday. Tribune Photo

The 25-year-old engineering graduate cleared the exam in his first attempt. He was also a Class X topper in Patiala in 2009.  Four months ago, Rishab bagged a government job as an Inspector in the Co-operative Societies.

He said he has always aspired to become a civil servant. “I have appeared in the UPSC exam. Now, I have cleared the CAPF exam and will be recruited as Assistant Commandant in the Central Industrial Security Force (CISF).” The UPSC had conducted a test for recruitment to the CISF, BSF, ITBP, CRPF and SSB under the CAPF and has selected 416 candidates from all over the country.

He said, “I completed graduation from Thapar Institute of Engineering and Technology (TIET) and took up a private job. From 2017, I started preparing for competitive exams. At times, I study for hours together  and sometimes, I do not study for the entire week.”