CHANDIGARH: Pacer Azhar Wani claimed a five-wicket haul as Jammu & Kashmir bowled out Chandigarh for 110 runs on the second day of the Vijay Merchant Trophy at the Sector 16 Cricket Stadium here today. 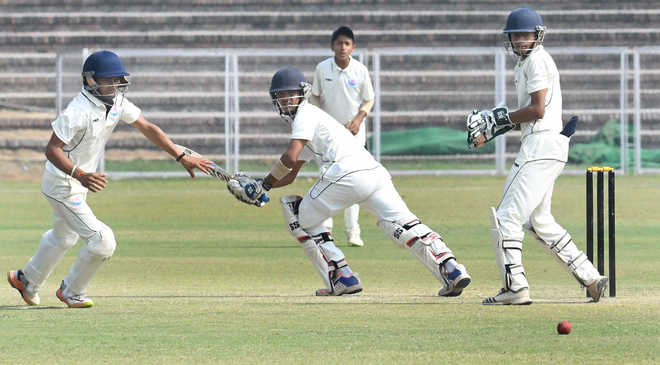 A batsman of Chandigarh plays a shot against J&K during a match for the Vijay Merchant Trophy in Chandigarh on Friday. Manoj Mahajan

Pacer Azhar Wani claimed a five-wicket haul as Jammu & Kashmir bowled out Chandigarh for 110 runs on the second day of the Vijay Merchant Trophy at the Sector 16 Cricket Stadium here today. Having scored 167 runs in their first innings, the visitors produced a brilliant bowling performance to claim a 57-run first innings lead.

Resuming from overnight 2/1, Chandigarh had a disastrous start as they lost the wickets of Nishunk Birla (8), Kabir Kalsi (11) and skipper Pratham Sodhi (13) in quick succession. Wani accounted for Birla, while Mohd Amaan and Ranjot Singh claimed Kalsi and Sodhi, respectively. Struggling at 53/4, Paras and Rajveer provided some stability to the side. However, Wani swung into action again and claimed Paras (21 off 16 balls). Amaan claimed Rajveer’s (22 off 92 balls) wicket to reduce Chandigarh to 99/6. Next-in Neel Dhaliwal (14) was run out by Ranjot, while Wani accounted for Ivraj Ranauta (5) and Adit Kaundal (1) to push the city team into more trouble. Ansh Khosla (0) was the final wicket to fall, dismissed by Adishwarr Singh Kotwal. Wani (5/40) was the pick of the bowlers, while Amaan (2/31), Ranjot (1/11) and Kotwal (1/18) were the other wicket takers.

However, Jammu & Kashmir also struggled in their second innings as they were reduced to 84/4 at stumps. Opener Rohan Gill was the first to go after falling prey to Dhaliwal without making any contribution to the team’s total. Akshit Gandral (1) was the next to go after he was claimed by Sodhi as the team’s total read 2/1. Thereafter, Udhay Singh and Zayd Agha raised a 58-run partnership. Birla accounted for Agha (19 off 64 balls) to end the partnership. Kotwal’s (0) wicket was claimed by Khosla as Jammu & Kashmir were reduced to 61/4. Rydham Sharma (3) and Udhay (56 off 86 balls, with eight boundaries) saw the day out. Dhaliwal, Sodhi, Khosla and Birla claimed a wicket each for the bowling side.