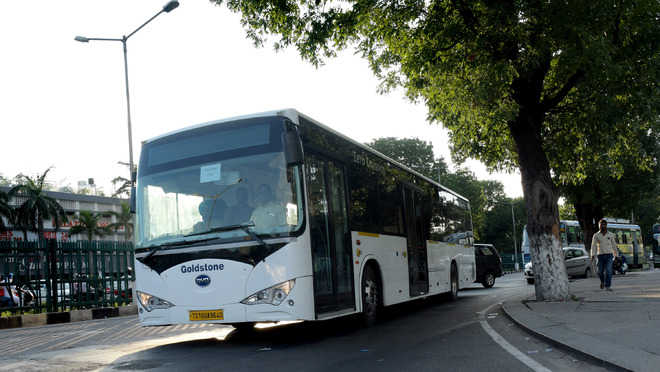 An electric bus plying on a trial basis, at Sector 17 in Chandigarh on Saturday. Tribune Photo: Ravi Kumar

Hyderabad-based Gold Stone company has brought the bus to the city. Goldstone Infratech Ltd has tied up with BYD Company Ltd, based in China, for the assembly of the electric bus in India.

The trial started from IT Park to Sector 43 here. An officer of the CTU said the Gold Stone bus has a seating capacity of 41 persons and approximately 25 persons can stand inside it. The bus is gearless and has air suspension facility. It can run up to 250 km per charging.

Yashjeet Gupta, GM of the CTU, said the bus covers 232 km in a single charging. To reduce pollution caused by the increasing number of the vehicles in the city, the administration has started the process to introduce electric buses in the city under its Smart City plan.