Customs withholds export cache, asks UT: Is it your heritage? 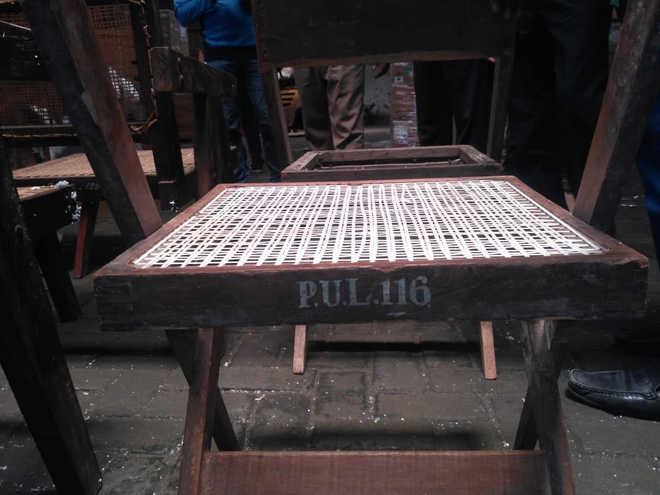 A designer chair, part of the export consignment meant for Belgium, but withheld by the Customs.

For the first time since Le Corbusier’s Chandigarh creations began entering offshore auction circuits after escaping local law enforcement, the central Customs has withheld an export consignment that resembles the furniture the Swiss-French architect created for the City Beautiful.

A cache of 14 designer chairs are lying in Delhi Customs Zone’s storehouse at Tuglakabad here awaiting confirmation from the Chandigarh Administration on whether the furniture belongs to it.

Preliminary enquiries by the UT Administration reveal the chairs are part of the iconic furniture ensemble Corbusier and his cousin Pearre Jeanneret created for Panjab University, Chandigarh.

The consignment may well be worth over US $70,000 in the international market where Corbusier’s furniture and fixtures have continued to be auctioned despite Indian activists raising the red flag with the CBI, the Archaeological Survey of India and the other authorities concerned.

Leading the crusade is Ajay Jagga, a Chandigarh-based activist-lawyer, whose fight to prevent Corbusier’s heritage from being sold as scrap or being smuggled led to the creation of the Chandigarh Heritage Protection Cell, which is working to address this challenge.

The Tribune has learnt that the Heritage Protection Cell held an emergency meeting on July 6 after it got a query from the Central Board of Indirect Taxes and the Customs on whether the furniture consignment held back in Delhi was Corbusier’s designer creations for Chandigarh. The consignment was meant for export to Belgium.

“Chairs in the consignment are mirror images of those that Le Corbusier designed for Panjab University. On Monday, we met the PU Vice-Chancellor and asked him to certify the furniture. He is in the process of verifying the codes on the consignment, a majority marked PUL (read Panjab University Library). Once we get a conformation certificate, we will revert to the Customs, Delhi, seek sealing of the cache and an FIR for theft,” Jagga, member of the cell, told The Tribune on Monday. Back in Delhi, customs official Abhishek Gupta confirmed to The Tribune that they were holding back the ensemble pending the Chandigarh Administration’s reply.

If sealed, this will be the first consignment of Corbusier heritage to be recovered at home before escaping for offshore auctions. The past three years alone have seen over 20 auctions in the US, France and other European nations of precious designer furniture and fixtures Corbusier created exclusively for Chandigarh.

“Corbusier-designed manholes are being sold as scrap in Chandigarh for Rs 300 a piece. One such manhole is fetching Rs 11 lakh to Rs 13 lakh in auctions abroad,” says Jagga, whose efforts to secure Chandigarh’s heritage have gone in vain for years.

He even urged the Archaeological Survey of India to list Corbusier’s iconic designs under the Art Treasures and Antiquities Act, 1972, to make their sale punishable. However, the ASI wrote back saying it could only list as antiquities heritage that is 100 years old or more. Experts, however, say Corbusier designer pieces can easily be called “art treasures” to attract legal protections.

Asked what could have triggered the latest corrective action by the Customs, Jagga cited a recent letter he wrote to Vice-President M Venkaiah Naidu, also Chancellor of the PU, warning him of rampant auctioning of the Corbusier-created PU furniture abroad.