MOHALI: The Mohali administration will demolish specified illegal structures around the Chandigarh Air Force station and the local airport 15 days from today. 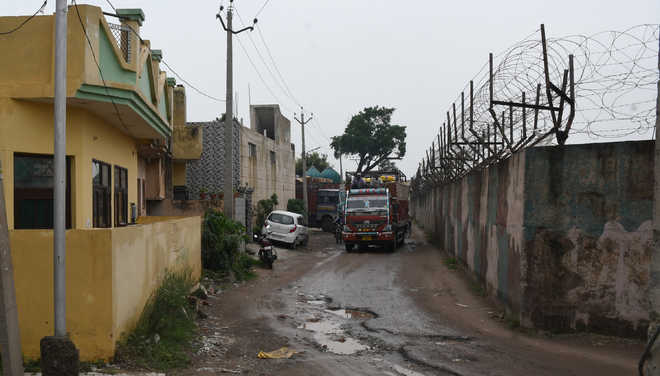 Houses along the wall of the airport at Pabhat village in Zirakpur. file photo

The Mohali administration will demolish specified illegal structures around the Chandigarh Air Force station and the local airport 15 days from today. Notices to offenders were issued by the Deputy Commissioner as Collector under the Defence of Works Act, 1903, here today.

Following directions of the Punjab and Haryana High Court to remove illegal structures around the Air Force station and Chandigarh International Airport, 98 structures that had come up after March 3, 2011, were to be razed as they violated safety norms.

“The owners of the identified structured have been given 15 days time to either remove construction or to submit any claims or objections in writing,” said Girish Dayalan, Deputy Commissioner (DC), Mohali.

“In case no objections are received by us within the stipulated time period, the demolition of the said structures will be carried out without further notice,” the DC added.

A government notification issued in January 2010 stipulates that no building or structure is to be constructed or any tree planted with 100 metres from the outer boundary of the Air Force station. A public notice to this effect was issued by the local administration in March 2011.

“As per orders of the High Court, these 98 structures are to be demolished immediately without payment of any compensation after following due process,” the DC said.

The Mohali administration has identified 324 structures that have come over a period of time within 100 metres of the Air Force station’s boundary wall. These include houses, shops and godowns.

While structures that have come up after the public notice of March 2011 face immediate demolition, the High Court will take a call on the matter pertaining to those built before this date.

The High Court had constituted a committee under the chairpersonship of the Chief Secretary, Punjab, to examine the status of illegal construction within 100 metres of the boundary wall of the Air Force station.

It is to be noted that in a survey by the Zirakpur Municipal Council and GMADA as many as 324 structures were identified, which came under the radar of the authorities concerned.