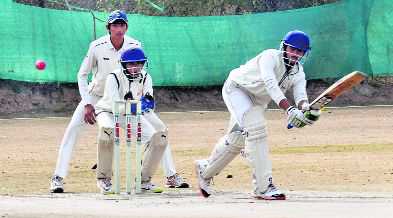 A DAV School batsman flicks the ball during their match against Sector 16 Coaching Centre. Photo: Ravi

A quick-fire century by Dev powered AKSIPS, Sector 41, to a 119-run win over Mohit Academy, Panchkula, in the St Joseph’s U-14 Super League Cricket Tournament here on Friday.

Batting first, AKSIPS scored 257/4 in 25 overs, with Dev hammering a stunning 120 off 71 balls, including 10 boundaries and three sixes. Karman made 27, while Utkarash chipped in with 24 runs.

DAV start off with a win

In reply, the Sector 16 outfit achieved the target in 40 overs with seven wickets in hand. Aman made an unbeaten 38 off 46 balls, while Manu remained not out on 26. Gautam Shori and Rahul took a wicket each for the bowling side.

Yellow Lions defeated Orange Tigers by five wickets in the inaugural match of a triangular series organised by Nipun’s Will to Win Cricket Academy.

Batting first, Orange Tigers were all out for 119 runs in 23 overs. In reply, Yellow Lions reached home in 24 overs with five wickets in hand. Shatrughan made 35 runs, while Nitesh contributed 33 runs to the chase. Piyush claimed four wickets for Orange Tigers.

To seek withdrawal of PLA troops from ‘Finger 4’, Gogra, Gal...

Matriculation results to be declared on June 8