MOHALI:In a gory incident, senior journalist KJ Singh (65) and his bed-ridden mother Gurcharan Kaur (92) were found brutally murdered at their residence in Phase 3B2 this afternoon. 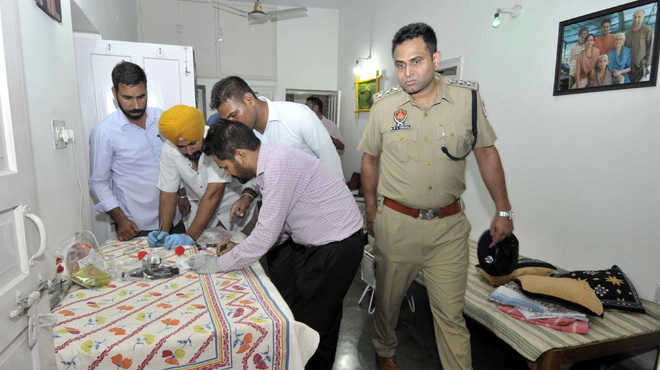 Forensic experts collect samples from the residence of the victims at Phase 3B2 in Mohali. Pradeep Tewari

In a gory incident, senior journalist KJ Singh (65) and his bed-ridden mother Gurcharan Kaur (92) were found brutally murdered at their residence in Phase 3B2 this afternoon.

The murderers, who were at least two in number as indicated by the circumstantial evidence, slit the throat of KJ Singh and also stabbed him in the stomach, while his mother was strangled.

Singh was lying in a pool of blood in his bedroom, while his mother was found dead in her room. From the main entrance door to Singh’s bedroom, a trail of blood could be seen on the floor of the house located along a green belt.

The mother-son duo was living in the house, while Singh’s six siblings, five sisters and an elder brother, reside in Mohali and Chandigarh.

What surprises one is the fact that the miscreants took away a 32-inch LCD screen, Singh’s mobile phone, his wallet and 18-year-old Ford Ikon car, but did not touch his gold chain and a purse containing around Rs 25,000 lying near the bed of his mother.

The lock of a steel box was found broken, but the police and Singh’s relatives have no idea as to what was missing from it. Even cupboards and other valuables were found intact, though signs of a scuffle and struggle were evident in the drawing room, the police said.

“Apparently, the miscreants wanted to project the crime as a robbery. Their motive was definitely something else,” said Mohali Superintendent of Police (Detective) HS Atwal, adding that the locks of one-two steel boxes were also found broken. After committing the crime, the criminals bolted the door from outside and shut the main gate from inside before leaving the house.

The incident came to light at 1 pm when Singh’s sister Yashpal Kaur, who lives in Sector 71, and his nephew went to deliver lunch there.

Singh’s nephew Preet Inder Singh said, “When we didn’t see the car, my cousin Ajay Pal Singh thought  he (KJ Singh) might have taken our grandmother to some clinic/hospital. On seeing blood stains in the courtyard, my cousin and aunt went inside the house and were shocked to see the chilling scene. They then told us about the double murder.”

Preet Inder Singh had gone to attend a parent-teacher meet at his daughter’s school in Chandigarh around 1 pm.

“The blood stains on the door handle on both sides of the main entrance indicated that the attackers first slit his neck with a sharp weapon and then stabbed him, dragging him to his bedroom,” said DSP Alam Vijay Singh.

“The circumstantial evidence showed that some acquaintance could be behind the crime as Singh never let unknown people enter the house,” said the police, adding that there were no signs of a forced entry.

“Singh, who had opened the door (probably between 9 pm and 11 pm), must have seen them through the lattice door. Chances of him knowing the criminals can’t be ruled out,” said the police. Thinking his mother could reveal their identity, the accused murdered her too.

With the lower parts of the bodies turning blue and the blood on the floor drying, the police believe that the accused might have committed the crime before midnight yesterday when it was raining.

“It’s a blind double murder. We have found some clues, which are being studied systematically,” said the ADGP.

The bodies were sent to the Civil Hospital in Phase VI, where the autopsy will be conducted tomorrow.    police have registered a case of murder against unidentified persons at the Mataur police station.

Sixty-five-year-old KJ Singh, who was born at Rohtak in 1952, was a senior journalist. He started his career as a sub-editor with The Indian Express in 1978, where he became the Chief News Editor on the day of the launch of the paper’s local pullout, Chandigarh Newsline. Later, KJ Singh joined The Times of India in 2000 and then The Tribune Group of Newspapers in 2006 as the Chief News Editor. He had retired in 2009. Singh, who was fond of gadgets, was doing freelancing for some Canadian magazine.

An act so brutal

Till 7.30 pm on Friday, everything was fine, claimed the kin of the victims. “My uncle (KJ’s elder brother VP Singh) had a routine talk with him (KJ) at around 7.30 pm,” said Preet Inder Singh, who lives in TDI City.

Domestic help Rekha said she went to Singh’s place at 9 am on Saturday and rang the doorbell after seeing the main gate closed. “As nobody responded, I went back, thinking ‘sahib’ is not home,” she said.

Lived with mom in house

KJ Singh, who was a bachelor, lived with his mother Gurcharan Kaur in the 1-kanal corner house. Due to old age, Gurcharan Kaur did not keep well. Singh’s six siblings, five sisters and an elder brother, reside in Mohali and Chandigarh. They would bring lunch for the mother-son duo. Nobody stays in the house next to Singh’s residence.

A package from Amazon

The police are looking for a courier boy who brought a package ordered from Amazon. The packet, having blood stains, was seen lying at the spot. The police said it contained books.

The police have procured a CCTV footage from a neighbour’s house to get leads. The footage is being scrutinised. “We have procured the call detail records and are analysing those,” said Dwivedi.

Panic in the area

The double murder caused panic among residents in the area. A number of anxious neighbours visited the house of the victims.

Pawan Kumar Bansal, former Union Minister, said he was saddened by the death of KJ Singh and his 92-year-old mother. Expressing his condolences, Bansal asked the state government and the police to bring the culprits to book.