CHANDIGARH:Residents of the city will soon see electric buses running on roads as the first such bus arrived here today. 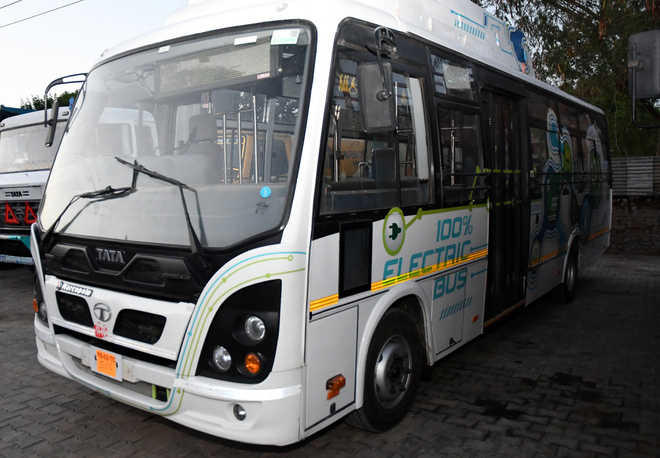 The electric bus that arrived in Chandigarh on Wednesday. Tribune photo: Nitin Mittal

Residents of the city will  soon  see  electric buses running  on roads as the first  such bus arrived here today.

To reduce pollution caused by the increasing number of vehicles in the city, the UT Administration has started the process of introducing electric buses in the city under its Smart City plan.

Before placing the order for the electric buses, the Transport  Department had asked companies to ply the bus in the  city on a trial  basis.

The   bus has a seating capacity  of 26 while nine passengers  can  stand inside it. Provision has also been made for two  differently abled persons. The official said the electric bus was a zero-emission vehicle and was safer than the usual buses. It had all features for the  safety of passengers, besides comfortable seating facilities. Electric buses are already running successfully abroad and trials are going on in some Indian cities, including New Delhi, Bengaluru and Pune. The CTU has made arrangements  for charging buses  at its  depot. Officials of the company said the bus  could run from 150 km to  180  km per  charging. The operational cost of the bus was much lower than the usual bus. The CTU has  invited expression of interest from manufactures of such buses. The companies have been asked to submit their proposal. Sources said work on the project started after approval from UT Administrator VP Singh Badnore, who had asked officials to develop the UT as a green city on the pattern of Bristol.

The Centre is providing subsidy to introduce zero-emission retrofitted electric buses under its flagship FAME India (faster adoption and manufacturing of hybrid and electric vehicles in India) scheme.