MOHALI:The police have busted a gang of vehicle thieves with the arrest of its three members. 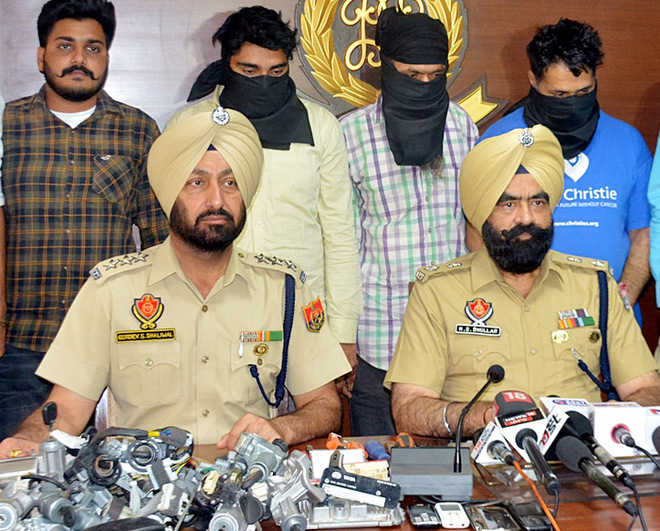 The suspects in police custody in Mohali on Friday. A Tribune photo

The police have busted a gang of vehicle thieves with the arrest of its three members. The police also recovered eight cars and one scooter from them.

The suspects were today produced before a court, which sent them to three-day police custody.

The police have recovered a Toyota Liva car, 2 Swift Dzire cars, two Verna cars, one Innova SUV, a Swift VDI car, an Alto car and a Maestro scooter from the suspects. The police also confiscated equipment, which were used in stealing vehicles, and registration certificates of 9 vehicles from them.

Harcharan Singh Bhullar, Senior Superintendent of Police, Mohali, said Sachpal, a resident of House No. 14, T12, PGI, had informed the police that his Swift Dzire car (CH-01-AX-4349) was stolen from Mystic Arch Palace in Sector 109, Raipur Kalan village, near the Banur-Landran road, on March 18. A case in this regard was registered under Section 379 of the IPC at the Sohana police station.

He said under the guidance of the team, Assistant Sub-Inspector Gurpartap Singh conducted a search operation in which equipment used to unlock the vehicles were recovered from a car of the suspect.

The SSP said during preliminary investigations, the suspects confessed that they had stolen 8 cars and a scooter. The police also recovered equipment used in stealing vehicles, number plates, sensors of vehicle keys, a cutter machine, a lock code machine, a drill machine, RCs and ACMs.

He said the suspects admitted that they used to purchase total loss vehicles from insurance companies. Later, they used to sell the stolen vehicles on the basis of RCs and other documents of these vehicles.

He said Surjeet, kingpin of the gang, against whom seven cases were already registered at different police stations, was out on bail in several cases. He said Surjeet was also a co-accused in drug cases registered against Jagdish Bhola and was also lodged in the jail with him.

The police have recovered a Toyota Liva car, 2 Swift Dzire cars, two Verna cars, one Innova SUV, one Swift VDI car, an Alto car and a Maestro scooter from the suspects. The police also confiscated equipment, which were used in stealing vehicles, and registration certificates of 9 vehicles from them.

Indicative of 'above normal' Sea Surface Temperatures in Ind...

Lay groundwork for another military-level interaction on Jun...

Bipartisan US support for India