Gaurika on top, Amandeep second on Day 1 in Hosur

CHANDIGARH: Gaurika Bishnoi fired a near-perfect round to open up a handy three-shot lead in the eighth leg of the Hero Women’s Pro Golf Tour in Hosur, Tamil Nadu, on Wednesday. 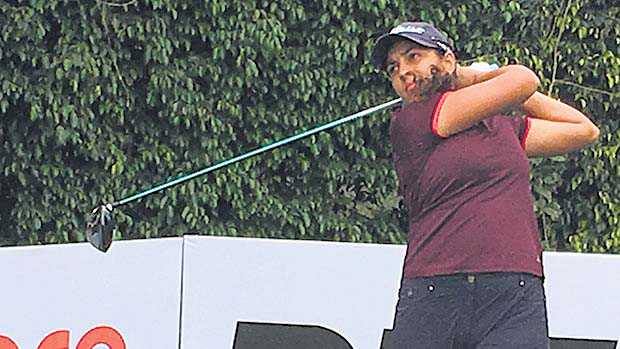 Gaurika Bishnoi carded a 3-under 69 on the first day of the eighth leg of the Women’s Pro Golf Tour in Hosur, Tamil Nadu, on Wednesday. WGAI

Gaurika Bishnoi fired a near-perfect round to open up a handy three-shot lead in the eighth leg of the Hero Women’s Pro Golf Tour in Hosur, Tamil Nadu, on Wednesday.

The Gurugram golfer, who has played only two events so far this year --- the second and the sixth legs --- shot a 3-under 69 with four birdies against one late bogey.

The 19-year-old had made a stunning impression in her first full year on the Pro Tour in 2017 by topping the Order of Merit.

Gaurika, who was second in the sixth leg of the current season, was three shots clear of Neha Tripathi and Panchkula’s Amandeep Drall, who carded a par 72 each.

Gaurika found her first birdie on the par-5 second hole but parred the rest of the holes right up to the 12th, which she birdied again. When she parred the 13th and found back-to-back birdies on 14th and 15th, Gaurika was 4-under with three more holes to go. A bogey on the par-3 16th spoilt the card, but she finished with pars on 17thand 18th holes.

Neha, on the other hand, had a rough start with bogeys on the first and the third and a double bogey on par-4 fifth. She calmed herself down and birdied four in a row from the seventh to the 10th and added one more birdie on the 12th to get under par. But she bogeyed 13th and 15th while finding another birdie on the 14th to finish the day at 72.

Amandeep had four bogeys, two each on either side of the course, but all her four birdies came on the back nine. She was 2-over for the front nine and 2-under for the backstretch and even for the round.

Trisha Sunil (73) was fourth, while Suchitra Ramesh and Smriti Mehra carded 74 each to be tied-5th. Siddhi Kapoor (76) was seventh, while Ayesha Kapur and Khushi Khanijau were tied-8th at 77.

Tvesa Malik of Gurugram, the top pro last week, shot a disappointing 78 with two double bogeys and was tied-10th alongside Afshan Fatima.

Gaurika will play in the final group alongside Neha and Amandeep, while Trisha, Suchitra and Smriti will be in the group ahead of them.

Sonam Chugh, Gursimar Badwal and Anisha Padukone are in the first group for the second round to be followed by Millie Saroha, Afshan Fatima and Tvesa Malik. The third group of the day will have Khushi Khanijau, Ayesha Kapur and Siddhi Kapoor.