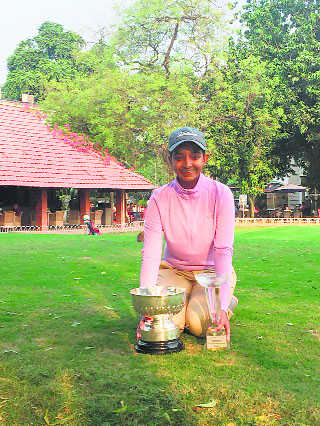 The most prestigious national golf event for amateur ladies in the country — into its 102nd edition now — had already witnessed a piece of history on Saturday when Delhi-based Khushi reached finals at the Tollygunge Golf Club in Kolkata.

The tournament featured top amateur players from India and abroad. It started off with two days of stroke play rounds and 32 players qualifying for the match play stage.

Khushi whizzed past her opponents displaying grit, determination and golfing finesse belying her age. The Class IX girl faced the summit clash against Jahanvi Bakshi, quite senior to the 14-year-old prodigy.

The finals were played on Sunday over 36 holes with two continuous rounds of golf. The teenage golfer was one down at the end of 18 holes but her unflappable approach saw her sweeping the title with one up through some exquisite shots.

En route, she walked into the history books by becoming the second youngest winner of the famed tournament after Aditi Ashok.