CHANDIGARH: The birthday party of BJP MP Kirron Kher’s political adviser Sahdev Salaria at a night club, F Bar, in Sector 26 turned a battleground following a clash between two groups attending the party after which gunshots were fired which hit two persons, including a 24-year-old former SD College president. 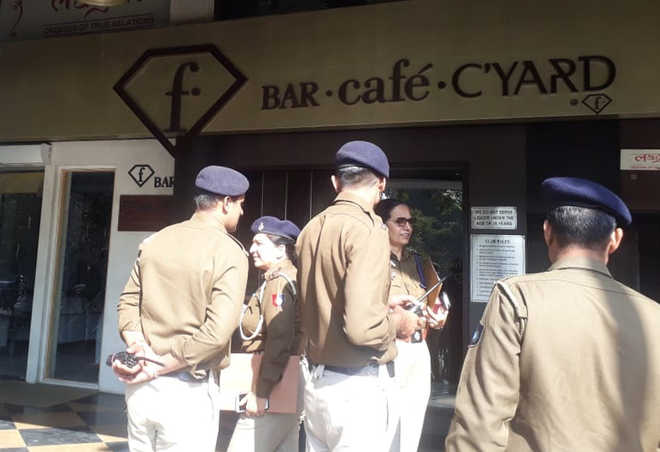 The police conduct an investigation outside F Bar at Sector 26, Chandigarh, on Tuesday.

The birthday party of BJP MP Kirron Kher’s political adviser Sahdev Salaria at a night club, F Bar, in Sector 26 turned a battleground following a clash between two groups attending the party after which gunshots were fired which hit two persons, including a 24-year-old former SD College president. Two others were also injured during the fight at the birthday party, which was also attended by city Mayor Davesh Moudgil.

Salaria, who is also the national executive member of the Bharatiya Janata Yuva Morcha and co-incharge of its Himachal Pradesh unit, had organised the birthday party in which many people, including the Mayor, were invited.

Sources said around 12.05 am, an altercation took place between the two groups, which led to a scuffle. “It took a few seconds for both groups to attack each other,” said an eyewitness.

According to a complaint lodged with the police, the suspects, Rinku and Chetan Munjal, pulled out pistols and allegedly fired gunshots.

One of the bullets hit Jaideep Singh, who was the president of the student council at SD College, Sector 32, in 2015, while another one hit Yogeshwar, who received a minor injury.

An NSUI leader, Pankaj Jakhar, who was also present in the party, suffered stitches on the head after he was attacked with a bottle. Jakhar also received injuries on both his hands. Another youth, Deepak Kundu, was also injured in the incident.

All injured were taken to the Government Medical College and Hospital (GMCH), Sector 32, in private vehicles. The sources said Jaideep, who suffered a serious injury, was later taken to a private hospital in Panchkula, while all others were discharged after treatment. The police got information from the hospital about the incident around 1.10 am after which various police teams rushed to the spot and the hospital.

The police said two cartridges and a live bullet were found from the spot.

The DVR of CCTV cameras was taken into possession by the police. A case on a complaint of Deepak Kundu has been registered against Chetan Munjal and others -- Rajesh Paswan, Chetan Munjal, Rinku, Rimy and Arjun, son of a UT head constable, under Sections 307 (attempt to murder), 506 (punishment for criminal intimidation) and 34 (acts done by several persons in furtherance of a common intention) of the IPC and Sections 25, 54 and 59 of the Arms Act at the Sector 26 police station. No arrest has been made.

Bid to keep incident under wraps?

Nobody attending the party informed the police about the incident and tried to keep it under wraps. It was almost an hour after the incident that the police received information from the GMCH, Sector 32, about a youth with a gunshot injury admitted to the hospital.

The Congress alleged that since the Mayor, BJP councillors and several people with a criminal background were present at the party, the police were being pressured to hush up the matter and  it was suspected that the CCTV footage of the club would be destroyed by the police.

Sources said Pankaj had an argument with Arjun, which led to a fight after which gunshots were fired by Chetan and Rinku.

Incident occurred after we left: Mayor

"I was invited to the birthday party. I went to F Bar to wish Sahdev Salaria after which I left  along with BJP councillor Anil Dubey. The incident happened after we had left." —  Davesh Moudgil, Mayor