Happy I didn’t give my Olympics medals to SAI: Balbir

CHANDIGARH:There would be very few people who have seen hockey legend Balbir Singh Senior get angry while talking about hockey. 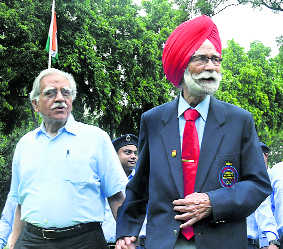 Balbir Singh (Senior) with one of his friends in Chandigarh on Sunday. Nitin Mittal

There would be very few people who have seen hockey legend Balbir Singh Senior get angry while talking about hockey.

The 93-year-old almost lost his temper when reminded about the memorabilia he handed over to the SAI in 1985 to keep in a museum, but which was all lost. Balbir Singh handed over his captain’s blazer from the Melbourne Olympics, 36 medals and over 100 rare photographs for the museum.

“Thank god, I didn’t give my Olympics gold medals to the government. Even those could have been lost. It’s disheartening to see that my souvenirs are lost,” said Balbir Singh. “The journalists should ask the government, ‘Where is the memorabilia? Who took it? Will they ever find it?’” said Balbir Singh, who was the special guest at a programme organised by the Chandigarh Press Club to celebrate 70 years of India’s first ever Olympics gold medal.

India won its first ever gold medal on August 12, 1948 in the London Olympics when the men’s hockey team defeated hosts Britain 4-0 in the final. Balbir Singh scored a brace on that historic day at the Wembley Stadium.

“I still get goosebumps thinking about that historical day. Everyone was on cloud nine. There was nothing more beautiful than watching my national flag being raised,” said Balbir Singh.

It was for the first time that India’s national anthem was officially played at the Olympics, as India had gained independence a year ago.  “One should work hard and aim high to achieve the highest honour. The spot at the top of the peak is still vacant and anyone can claim it with the help of pure dedication. Playing for the country is my biggest achievement,” said Balbir Singh.

Journey from goalkeeper to striker

He also talked about the difficulties he faced to get into the team. “I became good as a left-in, and despite being in tremendous form, I was not selected in the 39-member probables squad. But I stayed clam. My well-wishers even approached the then Indian High Commissioner in London, VK Krishna Menon. Through this, I got my place in the Indian team.”

The man with golden touch

In the 2012 London Olympics, Balbir Singh was honoured as the only Indian among the 16 chosen Olympics legends. His world record for most goals scored by an individual in an Olympics final still remains. He had scored five goals in India's 6-1 victory over Netherlands in the 1952 Helsinki Games.