CHANDIGARH:As India gear up for the forthcoming Hero Intercontinental Cup in Ahmedabad, goalkeeper Kamaljit Singh says the team is confident of defending the title. 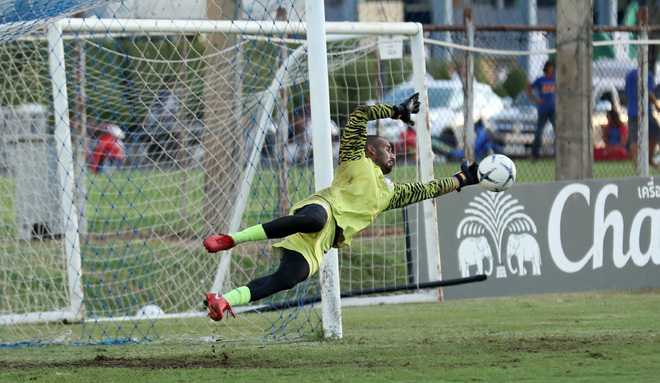 Punjab’s Kamaljit Singh is the youngest of the three goalkeepers in the Indian squad. AIFF

As India gear up for the forthcoming Hero Intercontinental Cup in Ahmedabad, goalkeeper Kamaljit Singh says the team is confident of defending the title.

“We are focused on winning the tournament,” said the 23-year-old, who is the youngest of the three goalkeepers in the Indian squad. “We will give our 100 per cent,” he added.

While Kamaljit is yet to make his senior team debut, his breakthrough season with FC Pune City in the Indian Super League makes him a confident man. “My next job is to seal a place in the final list of 23 for the forthcoming Hero Intercontinental Cup,” said Kamaljit.

The competition will see defending champions India take on Asian rivals Tajikistan, DPR Korea and Syria at the EKA Arena in Ahmedabad, and Punjab footballer felt “the tournament is a great opportunity to increase the sport’s popularity in Gujarat.”

“I have heard the stadium is very good and I’m sure that if we give a good performance, more and more fans will come to the stadium to cheer,” he said.

With Igor Stimac being appointed as the head coach of the senior side, Kamaljit feels that there is “a lot of competition” within the team. He, however, asserts that it doesn’t have any impact on his relationship with the senior pros Gurpreet Singh Sandhu and Amrinder Singh.

“Off the field, both Gurpreet and Amrinder are like my elder brothers. I refer to them as ‘paaji’. The three of us have a great relationship. Off the pitch we gel well, and on the pitch, we work hard and push each other to the limit,” he pointed.

The Indian shot-stoppers were trained by Tomislav Rogic at the King’s Cup and during the preparatory camp ahead of the championship in Delhi, and Kamaljit felt the Croatian helped them improve considerably.

“He’s a great coach, the best I have played under so far,” said Kamaljit. “He’s quite real. If we do something wrong, he tells us right away. I feel we have improved a lot under his guidance and I’m sure he will help us reach the next level.”

“I have just made my way into the senior team and my focus for now is pushing myself as much as possible, and keeping my place in the squad. There is a lot of competition for places, something which the coach encourages. I feel that I have improved a lot ever since I became a part of the group. Everyone wants to play and I hope to work towards it,” added the young custodian.

“The start, however, was different as I had initially started as a defender,” smiled Kamaljit. “I used to play a bit of football in school. I was 10 or 11 when my parents saw an advertisement in the newspaper about trials for a local academy — Sant Baba Hazara Singh Football Academy — and took me there,” he recalled.

“I got to know that they were looking for a defender. I didn’t know how to play well at that time, but I somehow got selected as a centre-back,” Kamaljit smiled again. “It was only after some time that my coaches asked me to start training as a goalkeeper.”

The goalkeeper took his first strides at the AIFF academy in Goa, which he hailed as the “perfect platform” for his development.

“I trained at the AIFF academy for three-and-a-half years. That was a great experience for me. I got to learn and gain so much,” he revealed. “I owe a lot to the academy. In fact, I signed my first team contract from the academy.”

“The academy was the perfect platform for me, and for all the players who have come through the academy ranks. It set the base for all of us.”

The shot-stopper went on to represent the country at U-14 and U-16 level, but suffered an injury setback prior to joining the U-19 team. However, he fought his way back and then was part of the Indian teams at the 2014 Asian Games in Incheon, South Korea, and the 2016 South Asian Games in Guwahati.

He was also part of the Indian squad for the SAFF Championship held in Dhaka in 2017, his first senior team call-up.