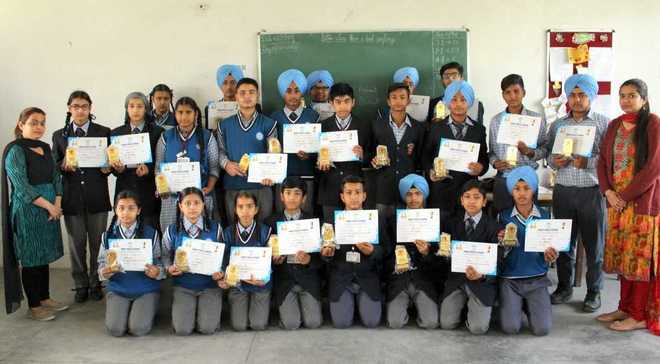 Indus Public School, Badali Road, organised the annual awards ceremony for the current academic session. Students were awarded for their performance in various subjects and overall performance i.e. aggregate score. Class toppers were honoured with medals and certificates. Children who had shown exemplary improvement in academics were also honoured to encourage their growth and promote the idea of constant improvement. Apart from the traditional awards, students were also felicitated for their oratorical, dancing and singing skills. Principal Parampreet congratulated the winners and wished them for their future goals.

A workshop on ‘The Bhagwad Gita and the Spiritual Revival’ was organised at Bhavan Vidyalaya, Sector 15, Panchkula. The workshop, which was based on the 14th and the 16th chapters of the Bhagwat Gita, aimed at resolving various problems of life through recitation of shlokas and an in-depth discussion on them.

Four students Aditi Khare, Apurva Dhiman, Jaskarandeep Singh Sidhu and Jahnavi Likhari of Class XI from Learning Paths School participated in the 2019 JA Asia Pacific Company of the Year Award Competition which took place in Manila, Philippines. As many as 20 student companies from 13 Asia Pacific locations showcased their products and services. During the three-day competition, young entrepreneurs competed for awards. Each competing team was required to give a business presentation, sat for interviews with the panel of judges and showcased and sold their products in the JA AP COY Trade Fair before celebrating with an awards ceremony and dinner.

Ankur School, Panjab University, organised an orientation programme for parents, which focused on effective communication between teachers and parents. The programme was presided by Principal Dr Parminder Duggal. Parents were briefed about the upcoming plans and schedule to be followed during the current session. Handouts on good parenting and other important guidelines were handed over to the parents.