Jagat Cinema, a tale of falling and malling

TDI Mall in Sector 17, popularly known as Jagat Cinema, is perhaps Chandigarh’s only cinema which has been able to (mostly) retain its old façade, but also bears the look and feel of a modern, run-of-the-mill, mall from inside. 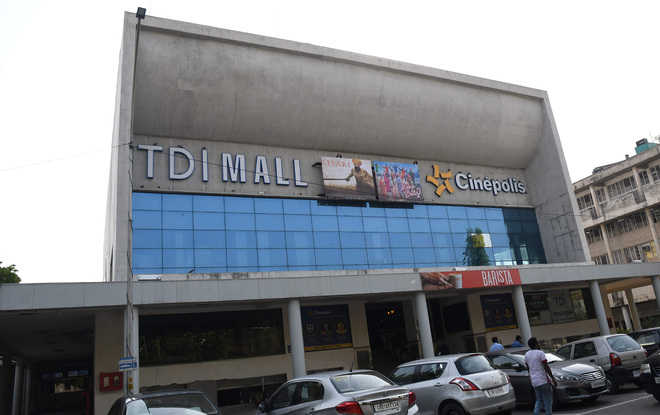 TDI Mall in Sector 17, popularly known as Jagat Cinema, is perhaps Chandigarh’s only cinema which has been able to (mostly) retain its old façade, but also bears the look and feel of a modern, run-of-the-mill, mall from inside. However, whether or not this transformation has worked for Chandigarh’s once beloved theatre is questionable.

Jagat Cinema, built in the early 1960s, is one of the city’s oldest theatres. Like the Neelam Theatre, Jagat was primarily designed by architect Aditya Prakash, under the guidance of Pierre Jeanerret and has a modernist architectural style.

“Both Neelam and Jagat were built to harmonise with the style of Sector 17,” Prakash had said.

According Deepika Gandhi, Director at the Le Corbusier Centre, Neelam and Jagat were envisioned as two nodes for sector 17, between which all of the sector’s activity was supposed to take place.

The exterior of the mall was painted white. The company concerned — TDI — had to pay a fine for tampering with it.

“The next time we painted it, we tried to get the colour right. A little old and dirty-looking was the aim,” chuckles a TDI employee.

Inside, the mall has three floors and a basement. While the top floor is occupied by Cinepolis, an international chain of movie theatres, the rest of the mall is divided into 64 shops. Out of all these, exactly one of them is operational — occupied by a Barista cafe. The space is otherwise deserted, only occupied by TDI employees and security guards.

The company, however, has sold 58 of these shops. The empty shops, which have never been used, reveal ‘For Sale’ signs on a quite a few of them. “Some of the owners are trying to resell the shops,” says the TDI employee.

Nothing much has happened in years

It has been around 14 years since the TDI purchased the mall from late Seth Charandas, also the owner of Kiran Cinemas. Since then, there have been a series of hiccups which caused Jagat to remain completely shut for more than 10 years.

The company — TDI — announced the conception of a mall in 2006, with a plan to open it to the public by 2007. “People like to visit the Sector 17 Plaza for shopping and complete entertainment. The TDI Mall is a spectacular state-of-the-art shopping-cum-entertainment complex with a new-age design and world class facilities on a par with international standards,” read the press release at the time.

The company, however, subsequently had constant run-ins with the UT for violating the building norms.

The UT estate office had pointed out serious building violations, including construction on government land and lack of clearance from the environment ministry for the renovation of the space.

Further, UT officials had also complained that TDI did not develop the mall according to the sanctioned plan.

“We did not receive a no-objection certificate from the UT government for several years,” says a TDI employee.

The mall finally opened to the public in 2016, with only a functioning multiplex. The multiplex has three screens and 641 seats. Currently, it is screening Kesari and Kalank.

“The response has been great as compared to single-screen theatres. Around 44,000 people visit the multiplex every month and the revenue is in crores,” says a Cinepolis employee.

The area has been given on lease to Cinepolis for 20 years.

“We provide better safety, seating and technology as compared to a single-screen theatre,” says the employee.

However, when asked about replicating the same transformation as Jagat’s in other single screen theatres of the city, he says, “But look at other malls — DT, PVR…nothing worked. Only Elante has.”

According to Gurjot Singh, a consultant with the Administration on the Sector 17 rejuvenation plan, part of the reason why TDI Mall hasn’t picked up is that Sector 17 is no longer the hotspot it once was. “I think they did the best with the constraints that they had. I think it failed to take off because it was delayed for several years, and not much is happening in the northern part of the sector or even around the mall,” says he.

The mall also does not open into the main Plaza, which is a change that the builders could have considered, he adds. For Deepika Gandhi, Director at the Le Corbusier Centre, Jagat’s interiors changed so drastically, “it lost its soul and spirit” “We have to understand the essence of a space. The multiplex is so cramped. It is a disappointing experience…we can’t be greedy. The place isn’t doing well because it’s not appealing,” she adds.

Today, when the average ticket price is Rs 160, the mall has excluded a certain demography which earlier could visit Jagat.

“Rich, poor everyone would come here. Now the poor people can only go to single-screen theatres,” says Daulat Ram Sharma, who has worked at Jagat since 1965. A booking clerk in the earlier days, TDI had decided to renew his employment. A ticket would cost anything between Rs 1.5-Rs 3 in the olden days. Sharma remembers the time when tickets were booked weeks in advance and movies would even run for four months straight. “Punjabi movie ‘Mamla Garbar Hai’ and ‘Haqeeqat’ were our biggest hits,” says Sharma.

According to Sharma, TV and technological advancements are the reasons for the downfall of single-screen theatres. He, however, maintains that Jagat was doing well at the time it was sold. To his memory, Gadar was one of the last popular movies screened here.